Home Guides OptiFlight Guide: Tips & Tricks To Getting All Stars

Welcome to OptiFlight, an air traffic management game where you are in charge of planning flight routes between cities across the continental United States and the United Kingdom. You only have a few seconds between each round and your job is to get the majority of passengers to their destinations through efficient use of flight routes.

OptiFlight’s tutorial does a good job of teaching you the basics of the game, but we will go over thing in more detail here to get you more situated with the core mechanics. Optiflight is deceptively complex, so keep reading on.

Upon first entering a level you are greeting with cities on the map. The number next to each city’s nameplate is how many passengers that are currently in that city. The more passengers, the more flights will come out of that city.

To start off, try to pick the busiest city on your map and make that your “central” city. By this we mean upgrading this city first and using it as a central hub to connect all of the smaller cities. The cities with the lower amount of passengers do not need as many connections as the busier ones.

Once you have made your connections, you can hit the start round button to watch your plan unfold. Each round only lasts for a certain amount of time, and you need to complete as many flights as possible before the round timer is up. To pass a round, you must reach at least 75% completion rate.

Completing all rounds with high completion rate will win the level for you! If you want, you can also chase down the optional star challenges present on each level.

Successfully beating a round will sometimes reward you with a large sum of money. You can use this money to upgrade an airport, which will make it more efficient. You can upgrade an airport one final time to level 3, which creates the ultimate airport. Here are the exact stats:

Knowing which airport to upgrade is the key to winning the later stages. Remember that the more demand for a particular city, the more you should invest in that corresponding airport. A level 3 airport will be sending out flights like no tomorrow, and this is good if it is a high demand airport.

If you tap on any city, you can view three different info panels. The first one shows the airport’s current upgrade level, the second one shows all connected and unconnected cities, and the final one shows the demand – which is perhaps the most important panel to pay attention to.

The demand panel will show you exactly how many passengers are boarding at the city, and which city they are traveling to. This info is not particularly helpful for cities that you use as central hubs, but they can be very helpful for the smaller, less popular cities.

Also, do not worry about having too many connections (unless you are trying for a star). In most cases having more connections is a good thing, but it can cause one airport to get jammed if it is too much. You can delete connections as many times as you want, so try out different setups.

Completing or failing a round will let you replay it, so do not worry about trying something that probably will not work. It can give you ideas on what to improve, so that you are constantly improving.

You can beat a level with enough brute force eventually, but if you want to chase the optional three stars on every level, you are going to need a little more finesse – you will need to meet certain criteria in order to get the stars.

The first and most common star mission you will see is to keep your completion rate at a certain rate or higher. This one will test your ability to efficiently route your cities and use your upgrades wisely. The hardest version of this mission is to maintain a completion rate of 95%, which requires your flight plan to be almost 100% optimized.

Another mission requires you to keep all connections and delete none. Completing this mission is rather tricky and usually requires multiple replays the same level to get down the perfect flight plan. This basically means that whatever paths you put at the beginning of the level must stay until you finish all rounds, so you need to plan further ahead.

Another kind of mission is similar the previous one: you cannot create more than a certain amount of connections. The first instance of this is on Level 3 Hub & Spoke where you cannot have more than six routes. This one is not too troubling, you just need to know what cities are your most traversed and make sure those are connected first.

As you progress through the game, it will throw new mechanics and obstacles for you to learn about. The first one you will encounter are locked connections. Some levels start with some connections already built, and they cannot be deleted; you must work around these locked connections while building your own routes. This problem is not too bad and it is easily circumvented.

The next mechanic you will encounter are “rushed” airports. When an airport is rushed, that means that it will experience a huge influx of passengers flying there, so you need to prepare accordingly. Upgrading the airport is a good place to start, and then make sure that it has enough connections going out to disperse the traffic as quickly as possible.

You will also begin to encounter airports that close. In between rounds an airport may shut down suddenly, and all connections to the airport will be broken. Depending on your flight plan, you may have to rework an entire plan to work around this problem. This one is tricky, so be prepared for anything.

There are more mechanics for you to discover! Just remember that you can always replay a round if you feel like you are not going to make the star requirement. You do not need to start from the very beginning, although that is always an option if you feel like you need a do-over.

That’s all for OptiFlight! If you have any other tips or tricks to share, let us know in the comments below! 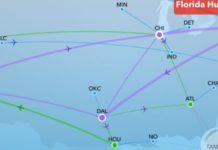 Create Your Own Flight Map in OptiFlight, Coming March