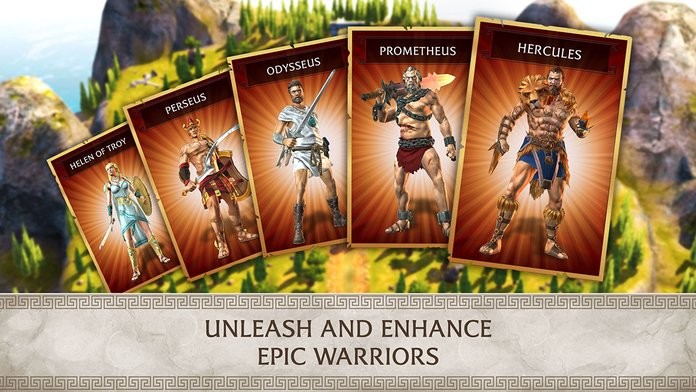 Olympus Rising is a recently released strategy games that amazes with its high quality graphics – probably some of the best we have on iOS so far. It’s the type of game that doesn’t really require you to spend hours playing, but you have to play at least a couple of times per day in order to get the most out of it and progress faster than the others. Because, yes, this is a really slow paced game, but one that’s worth all the waiting! And I am here to share with you a complete set of Olympus Rising cheats and tips to help you get the most out of the game as fast as possible.

So let’s not waste a single second and let’s check out below Touch, Tap, Play’s Olympus Rising tips and cheats!

1. Go to battle!
You need to conquer islands in order to have as many resources as possible – and those islands will be taken away from you as well – so keep on battling. This is key to quick progress: whenever you have the Ambrosia for it, go to battle!

A good strategy when it comes to battling is to have a hero in each group of islands: the longer the distance a hero has to travel from an island to another, the more Ambrosia it requires. And since we all know that Ambrosia is so difficult to get, it’s easier to just keep a hero in each group to have them near the islands and to spend as little Ambrosia as possible. Keep your weakest hero in the first group, then work your way up with better heroes (each new group of islands you uncover should be considered better than the previous one).

3. How to defend properly
I personally don’t think that it’s possible to really be able to fend off attacks from similar level players, but it’s worth trying. The key when defending your base is to build a road with as many turns as possible. Start setting your towers in the first 33% of the road (based on where the attackers start) to win some time and eventually get some distance between the waves of troops your attacker calls in. Set barriers at the beginning of the loop and place towers on the other side of the road: this way, archers will stop and attack the tower (which will cause damage to them, most likely taking them out) while melee fighters will take out the barrier. Ideally, have two towers for each loop and barrier that you place.

When defending, you should aim to delay the attackers for as long as possible: if they don’t manage to destroy your gate within the given time, they will lose the battle. That’s why you should have all your defenses as far away from the gate as possible, to win time and to give your gate time to produce as many defenders as possible, while thinning the attacker lines as much as possible. Tweak your defenses and eventually you will have a tough nut to crack of a base!

4. How to attack properly
Each hero has its own powers and weaknesses, so you should adapt your attacking style based on that, but usually the troops that go in battle with you should all be the same. I found out that melee fighters are better than ranged ones, so try to bring as many melee fighters as possible. I usually start with two archers and then summon as many melee troops as I can. Try to delay your attack for as long as possible: the closer you are to your starting zone, the faster troops you will summon will arrive. In other words, if you get all your troops killed when you’re at the middle, you will have to wait a while before your newly summoned troops arrive because they have to go the same distance you went before them. However, you should constantly call in back-up to make sure that you replenish your lost troops as fast as possible. Combine that with smart usage of your power-ups and you can easily win all battles.

As I said, Olympus Rising is a pretty slow-paced game, but it’s worth playing it because it’s fun and looks absolutely amazing. Take your time, attack as much as possible when you have the Ambrosia and log in often to defend your conquered islands and you’ll do just fine!

If you have other tips and tricks to share with fellow Olympus Rising players, let us know by commenting below.