In Oddbods Turbo Run you play as a funny-looking… odd guy. Well, he may look funny and plump, but he’s faster than Usain Bolt on a good day and has more stamina than the Shaolin monks. So he’s taking running around quite seriously.

But since we’re not here to praise his skills, you might want some help controlling the little runt when he starts running, so we have the perfect thing for you in our Oddbods Turbo Run tips and guide. We will tell you all the little cheats you might want to know to never fail a jump, and collect all the coins in the process.

There are three lanes you can play in and collect coins and other goodies from, but you should always stay in the middle lane, because thats the safest and easiest way to dodge upcoming obstacles. Since sometimes they will try tricking you by blocking the middle and left lane and quickly after, the middle lane and right lane.

When that happens, you will most definitely fail in passing them (unless you have insanely fast reflexes), unless you quickly switch to the middle lane and into the free land as fast as you ran past the obstacle.

This is the best chance you have when passing through such tricky obstacles, by quickly staying in the middle lane. And if there is that one tricky coin or boost placed right in front of a wall to bait you in, don’t fall for it! 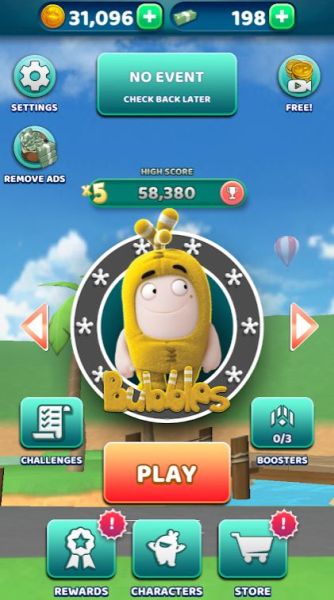 These boosts are very useful because some levels might start really tough for the first hundred meters and after a while they’ll be easier than you think. So don’t be upset if you get stuck there, and just use a boost because you will unlock another one soon enough!

This game will bend your field of vision and will make your fingers snap from all the twisted roads filled with obstacles! So make sure you are ready because the adventure might quickly turn into a misadventure.

You will need to slide under objects, jump over weird obstacles and avoid those boxes and whatnot in order to avoid seeing stars. What I suggest you should do, is keep an eye out on the road ahead because the turns might be very very tight and you will be surprised at what lays behind that corner (especially if your devices’s screen is not that big).

You start with Fuse, but if you’re not happy with him… well, you’ll have to deal with it until you unlock the next one. To unlock the next character you can check for available events or just keep playing, because you will eventually get it.

To unlock more characters, you can also check the wheel where, if you’re lucky you can get a character (or not), but will definitely get a bonus!

When you join in game events you will be able to unlock other runts, such as Bubbles or Pogo and tons of boosts, so if you like them check out the Oddbods Turbo Run Facebook page, and keep an eye out for the in-game announcement (because there will be one!).

Demolish everything in the way 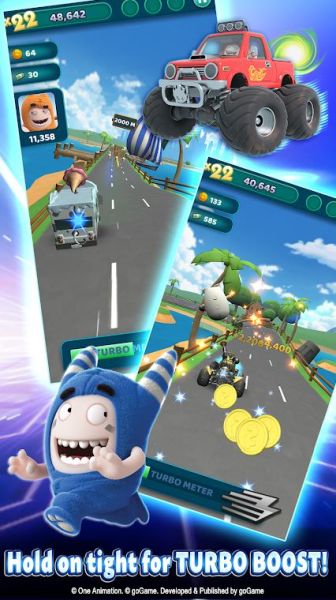 Once you fill up the Turbo Meter, you will unlock the monster truck! And just like any monster truck, this one is huge! It changes depending on which character you play, but it stays a monster truck!

When using this boost, you will be able to move through obstacles (I mean demolish them) and you won’t have to worry about jumping, sliding and avoiding them. So if you see a difficult road ahead, relax and get behind the wheel of a monster truck!

As you log in to the game, not only will you get missions, but you will also get boosts and coins (Oddcoins) to get you through the levels faster. These are available once a day and they change every day, so even if you don’t have time to play, stack up the boosts and play the next time you can!

These rewards will give you boosts to continue in case you fail, coins and on the 6th day, who knows? It’s a random surprise that could range from coins to drone and other boosts. So it’s definitely worth checking every day!

Boosts, events and many rewards

One of my favorite boosts is the drone. You can chill and avoid the obstacles while not having to collect coins because it will do it for you. To get other boosts, you will see a big gift in the lane (behind thousands of coins) and all you need to do to acquire it is run through. What you get is random, but nonetheless useful.

Another thing you need to keep an eye out for is the events. In game events will let you run through a different location and will unlock rewards such as boosts and characters for you (as mentioned above). 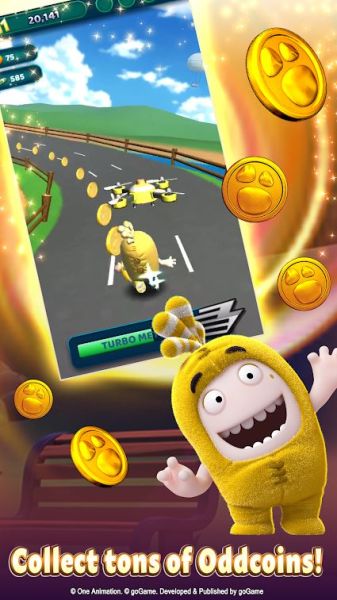 In Oddbods Turbo Run you can see other people’s score and try to beat them for a higher rank (who doesn’t like being at the top?). All you need to do is keep playing and get as many Oddcoins as you can without dying (or hitting your head to say the least).

If you want to spend your coins, you can head on to the in-game store and purchase some boosts for the next levels. I bet that monster truck can’t wait to get out on the streets and destroy some goods.

If you want to double your coins at the end of the run, watch an ad and it will do just that! Also, if you by any chance hit an obstacle and die, you can continue past that point by watching an ad.

If you do not like doing so, you can opt not to, but seriously? Double coins at the end of the run is a REALLY good reward I’d say.

These are all the Oddbods Turbo Run tips and tricks we have for now, but if you know some extra advice, don’t keep them to yourself! Share them with fellow players down in the comments below!