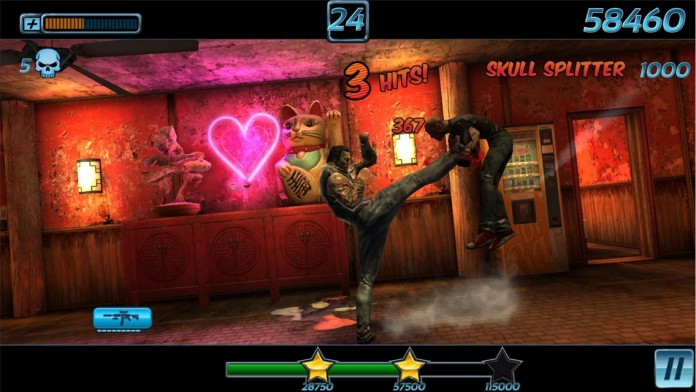 Many console and PC developers have recently released some high profile titles for iOS devices. It seems like they have finally realized that the mobile market is not a threat to the usual video games market. With the target audiences being so different, it’s no surprise that some companies are trying to tap into the mobile world with some unique titles.

A new side scrolling fighting game has been released today in the App Store. This release is quite surprising, since the publisher never announced a final release date.

Fightback has been created by Ninja Theory, the team behind some good consoles and PC games like the recently released Dmc – Devil May Cry and a few others.

As the name suggests, the game will feature a lot of beating to do. The game sports a touch based punch, kick and combo mechanic that will allow players to dispose of the enemies found in the over 100 stages included in the game.

As if 100 stages weren’t enough, an Endless Mode has been included, allowing gamers to take on an endless wave of enemies. Doing good in this mode will let gamers earn more cash that can be used to unlock more contents.

Nothing out of the ordinary, that’s for sure, but why break a formula that works so well? The game will be a perfect title to play on the go thanks to its pick up and play nature.

Fightback is now available on the App Store. The game can be played on both iPhone and iPad. If you want to learn more about the game, you can check out a gameplay trailer right below. Beware of punches and flying kicks!