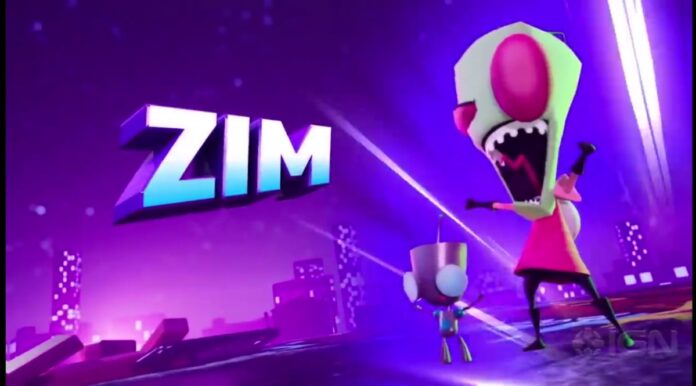 Zim has landed in Nickelodeon’s All-Star Brawl. The egotistical bug fiend from the planet Irk has paused his mission to rule Earth and enslave the human race, to battle his fellow Nickelodeon stars in this new fighting game. If you want to know how best to play with Zim’s moves then just check out our guide below.

How to Play Zim

Zim is slow but light brawler style fighter who brings his robo-partner GIR to help him block his opponents movement. He may not be the quickest fighter to choose from but he makes up for that with his intelligence and readiness to bamboozle the enemy with tricks and traps. Zim comes with a sci-fi stage ‘Irken Armada Invasion’, a medium-sized stage with three platforms to use. Zim can direct GIR to any of the platforms and deal damage to the enemy through self-destruct. As GIR explodes on impact with the opponent, Zim can use him to block the opponent from moving across or onto a platform, forcing them in another direction.

Zim’s Light Neutral attack move is ‘Spider Poke’, his Light Up move is ‘Boosted Kick’, and his Light Down move is ‘Spider Spin’. All three of these moves utilise Zim’s spindly metal legs to their best effect by stabbing and slicing at the opponent.

Zim’s Light Air attacks also see him flaying his legs about like a crazy sci-fi insect. The Light Air Neutral is ‘Spider Windmill’, Light Air Up is ‘Aerial Spider Poke’, and the Light Down Air move is ‘Leg Stretch’. Zim’s Light Dash attack is ‘Spider Jab’, where he rushes at the opponent, stabbing at them with his spidery legs, throwing them backwards.

The strong attacks from this overconfident alien insect show his using any available weaponry he has with him. His Strong Neutral attack is ‘Burning Lasers’, his Strong Up is ‘Shock Spear’, and ‘Doom’ is Zim’s Strong Down attack.

His Strong Air attacks see him using his strong attacks in midair to devastating effect. These moves include ‘Aerial Burning Lasers’ (Neutral), and ‘Aerial Shock Spear’ (Up). The Strong Down Air move is ‘Mini Moose’ where Zim slams a small mammal onto his opponent from up high. Zim’s Strong Dash move is ‘Spider Saw’, where Zim spins out of control towards the enemy, dealing damage on the way.

GIR, zim’s malfunctioning robo-companion, is his Neutral Special move. GIR runs automatically but can be told to stop and start by tapping the special command, or jump by tapping the Light Air command. When GIR runs into an enemy he self destructs, dealing damage as he explodes. When GIR is hit by Zim he can switch directions- this can be very useful when players want to bamboozle the opponent.

Zim’s Up special move is ‘Bombs Away’, where Zim launches himself into the air and drops a bomb onto the opponent below. The Down Special move is ‘Lawn Gnome’, which sees Zim throw a garden gnome into the air where it hangs, suspended, and deals a radius of damage for a certain amount of time. Only one gnome can be deployed at a time.