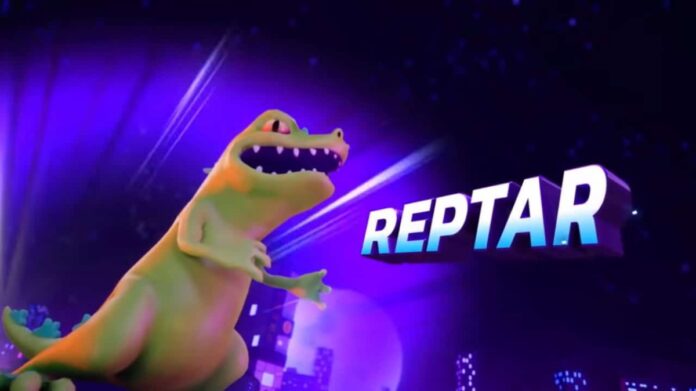 Nickelodeon All-Star Brawl has a prehistoric addition to their character roster- Reptar! Straight from the Rugrats series, this scaly monster is ready to take on any opponent it must face to help you win the battle. Reptar is Tommy Pickle’s favourite- but will he be your favourite too? Find out below how to play him, and what his special moves are.

How to Play Reptar

Reptar is a bit of a brawler- he is heavy and slow and hits the enemy hard with charged hits. He can be a target for quick combo hits so players must keep this in mind when playing with this brute. Reptar is strong, though, so he can easily get back at his opponents with a massive stomp of his enormous heavy dino feet. The stage brought along with Reptar is ‘Teeter-Totter Gulch’, a dusty, wild west playground. This stage is large, and has moving parts, a sand pit trap, and two huge chasms. The perfect ground for the ultimate showdown!

Raptor’s Light Air attacks include ‘Tail Swipe’ (Neutral), ‘Air Kick’ (Up), and ‘Leg Kick’ (Down). Those moves are all hits and swipes with Raptor’s powerful tail and dino feet. His Light Dash attack is ‘Somersault’ which puts him in a spin towards the opponents, sending them flying.

The strong attacks used by Reptar are pretty powerful, even though they are slow. ‘Heavy Tail Swipe’ (Neutral) utilises that hefty long tail of his, and ‘Backflip Swipe’ (Up) throws the enemy into the air, and ‘Tail Slam’ (Down) really puts the opponent in their place.

Reptar’s strong air attacks use his whole body as a weapon. ‘Aerial Heavy Tail Swipe’ (Neutral) deals damage with the tail, ‘Blazing Headbutt’ (Up) attacks the opponent with fiery breath, and ‘Spike Crash’ shows him throw his spiny back down on to the enemy with speed, and dealing damage. As Raptor bounces off the opponent, players can direct where he will land. His Strong Dash attack is ‘Diving Bite’, where Raptor runs forward and chomps at the opponent with his massive jaws.

Next up are Raptor’s amazing special attacks, starting with ‘Fireball/Volcanic Beam’. This Neutral attack sees him fire a fireball in a horizontal direction, or if charged up he can breathe a long line of volcanic fire out in front of him. The longer it is charged, the higher the damage. His Special Up attack is ‘Jurassic Slam’, where he leaps and the slams into his opponent. The Raptor Special Down move is ‘Flame Breath’, spitting flames in a wide area all around him. If players charge the attack Raptor also becomes invulnerable to knock-backs, and increases the range of the flames. This attack can also be used while in the air, throwing down a line of flames in front of him.

Finally, Raptor’s Taunt Move- as he is a mascot of a cereal company in the world of the Rugrats, Raptor grins while holding a big bowl of his favourite breakfast!

Tell us below in the comments if you have a favourite move while using Raptor.