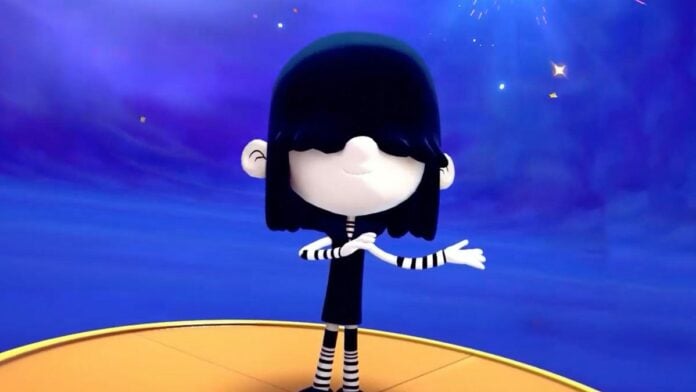 Oh my goth—it’s Lucy Loud! The cynical star of Nickelodeon’s “The Loud House” is one of the latest characters to be added to the All-Star Brawl game released on October 5th, 2021. This is bound to be every goth’s dream character to play, as she is surrounded by all the hallmarks of a good dark soul: coffins, black umbrellas, and more! Her spooky accompanying stage, the Royal Woods Cemetery, is straight from the show. Lucy is a very technical character and has quite a short range, but she makes up for that with her extra special Scare Modes. Find out more below!

How to Play Lucy Loud

Lucy Loud has a subset of special Scare Modes that can be triggered by landing a Neutral Special. The Scare Modes are: Normal, Vampire, and Ghost. These additions mean players will need to think on their feet and decide which is appropriate to use at different times. They also mean the opponent will never know what is coming next! You will know which mode Lucy is using at any particular moment by the effect surrounding her—blood-red cloud for Vampire and a spectral glow for Ghost.

Let’s start with Lucy Loud’s Light Neutral move Three Of Swords. This move is pretty close combat and slaps the enemy about with her weapon. Lucy’s Light Up move is Roundhouse Kick, where Lucy deals damage with a swift kick towards and up at the opponent. The Light Down move is Eight of Spades, where Lucy moves the earth from beneath the enemy’s feet as she digs towards them swiftly.

Her Light Neutral Air attack is the Aerial Three of Swords, while her Light Air Up is Aerial Roundhouse Kick. Both of these moves deal out quick swipes at the enemy with either a sword or a kick. Lucy’s Light Down Air is Axe Kick, and is as painful as it sounds, dealing damage to the enemy with a quick jump and axe swipe. The Light Dash attack is Ghost Float, where she floats at the opponent quickly, dealing damage as she hits them.

Lucy’s strong attacks are fabulously goth, using her black umbrella, scythe, and coffin as weapons. The Strong Neutral attack is Umbrella Poke, opening it at the enemy and flinging them away. Her Strong Up attack is Scythe, where she transforms into the Grim Reaper temporarily and lashes out at the enemy with her deadly weapon. Lucy’s Strong Down attack is Coffin Slam, hiding in the coffin with a macabre flourish and slamming it onto the enemy.

Her Strong Air attacks are variations of her other attacks, with the Strong Neutral Air Aerial Umbrella Poke and Strong Up Air Aerial Scythe. Her Strong Down Air is Poetry Slam, where she grabs her favorite book (Poe, perhaps?) and slams it down onto the enemy from a great height. Lucy’s Strong Dash Attack is Bat Swarm where, just like Dracula, she transforms into a swarm of bats and rushes at the enemy!

Lastly, Lucy’s spooky Special Attacks: Dark Bite is her Neutral Special attack and sees Lucy change Scare Mode every time she bites an opponent. When you hold the button in Vampire Mode, she launches four bats to the opponent, and holding the button in Ghost Mode turns her invisible for a few seconds. When each mode is done, it resets to Normal mode.

Lucy’s Special Up attack is Flight of the Bats. In Normal Mode, she rises up with a bit of horizontal control. In Vampire Mode she rises diagonally, and in Ghost Mode, she flies upwards a little less than in Normal Mode and then slams into the enemy. Lucy’s Special Down attack is Jump Scare, where she teleports quickly and gives off different scary effects when she appears again: in Ghost Mode, she has a few seconds of invincibility, and in Vampire Mode, she slams the opponent with a coffin, dealing damage.

Finally is Lucy’s Taunt Move where she shakes her head at the opponent, like the moody young goth kid that she is.

If you have any hints or tips for playing as Lucy, please let us know in the comments!