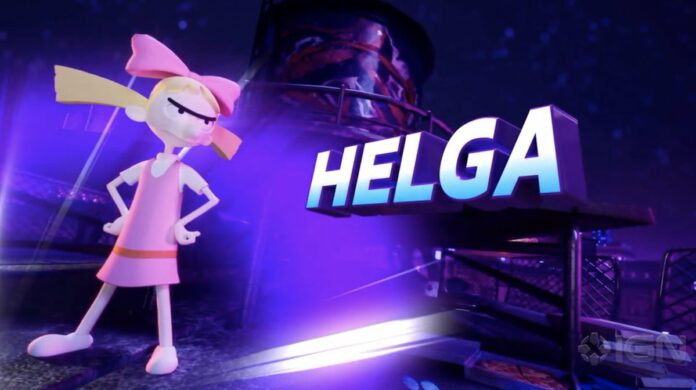 Nickelodeon All-Star Brawl has brought the cynical and rude Helga Pataki to the game. The Arnold-obsessed pre-teen from the hit show Hey Arnold! is often a bit of a villain in the TV show so she should be a great fighter in this new brawling game from Ludosity. Helga Pataki is smart and capable so having her on your team would certainly be a bonus!

How to Play Helga

Helga is fast and strong but with weak defences, making her a ‘glass cannon’ type of fighter. She deals a lot of damage to her opponents with her average-paced hits, but her real skill lies in her speedy movements. Helga has to dodge enemy attacks, and try to position them so she can hit them with her amazing special attacks. Helga brings an no-platform stage with her called ‘Traffic Jam’. It is a medium-sized stage that consists of a moving bus and a car in front and behind that Helga and her opponent can jump onto. Just try not to get yourself run over!

Helga’s light moves really bring out the bully in her. Her Light Neutral move is ‘Shove It’, the Light Up move is ‘Smasher’, and her Light Down move is ‘Perfect Catch’, where she slides down and forward with a catcher’s mitt.

Helga’s Light Neutral Air attack is ‘Straight Kick’, while her Light Air attack is ‘Backhand Slap’. The Light Down Air move is ‘Double Heel Kick’ which can be stacked into combos if you can keep landing and kicking at your opponent. Her Light Dash Attack is ‘Hockey Tackle’, where the sporty schoolgirl slams herself into the opponent.

Helga’s Strong Neutral move is ‘Love Poem’, and sees her attack the opponent with her book of poetry written especially for Arnold. She uses a giant kick of her foot with her Strong Up attack ‘Kicking Dust’, and for her Strong Down move Helga brings tray in from the school canteen for ‘Lunch Time’.

Helga’s special attacks are straight from the bully playbook, and where would a playground troublemaker be without their trusty slingshot. Her Special Neutral is ‘Golden Magic Slingshot’, where she aims and fires her slingshot at the opponent to deal damage. This actually knocks the opponent forward instead of back, making for some fun and devastating combos! ‘Approaching Uppercut’ is Helga’s Special Up move which can be charged for extra power and a higher jump. Helga brings her baseball bat in to play for her Down Special with ‘Homerun’, holding for a moment of defence before swinging and hitting the opponent.

Lastly is Helga’s Taunt move, where she leans back nonchalantly on her baseball bat like the whole fight was just no big deal at all.

Let us know in the comments if you enjoy playing with Helga, and if you have discovered some particularly brilliant combo moves.