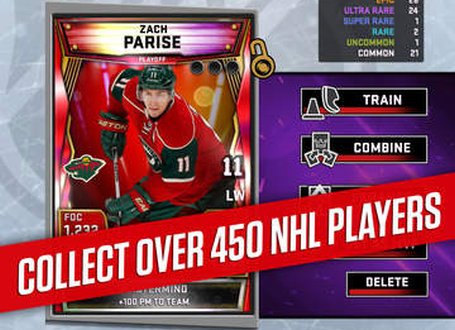 2K Games and Cat Daddy Games have just launched a brand new card collecting game on the App Store: NHL SuperCard, a game that challenges you to build the ultimate deck filled with superstars from the NHL and your favorite team and then pit them against other players in the world for supremacy and domination. It is extremely fun, but not extremely easy, so we’ve decided to come and help you with some NHL SuperCard cheats and tips to win all your games and build the best possible team!

So let’s not waste any time – let’s check out TTP’s NHL SuperCard tips and tricks below!

2. How to easily win ALL your games
We’ll start with a cheat first: if you are not satisfied with the outcome of a game (you’re about to lose it!), you can easily force quit NHL SuperCard and restart it. The game won’t be recorded and you will have no loss added to your records. This doesn’t help a lot, though since there’s basically no bonus if you have no losses in the Quick Games. But it does look good on your resume!

Back to actual winning, it’s worth noting that there are two types of wins that you can hope for: a win when the opponent scores against you and a win when you win all the three match-ups. The latter gives you three card picks instead of two, so it’s worth trying your best to win all the match-ups, which won’t be easy.

Usually, the AI plays its best cards in the first two rounds, so you should try to do the same. However, playing your best card first and having it defeated by the opponent’s best card is always a risk because you might actually end up losing the game, so I usually go with my second best card first and use the best card second. This way I have always won my games, even though I won’t usually get the three picks.

Picking your opponent smartly also helps a lot: check out the rarity tier they’re playing in (the shape/color of the trophy next to their MVP), as well as the number of games played. Try to pick players in a lower tier and those with less games played than yourself. Less games means less cards, which in turn means that they didn’t manage to upgrade their players as much as you did. And this means an easy win!

3. Train Your Cards when you max the numbers
You can collect 100 maximum cards in the game and I would suggest to always wait for those numbers to be filled before starting to upgrade your existing ones. This way, you will know exactly which are your best cards – and start upgrading them first. Look for doubles too because combining two cards of the same player will turn them into a Pro and improve their stats even more (but more on that a bit later). Starting to upgrade when you have the full 100 makes it easier for you to use the worst cards on the best – easy as pie!

4. How to create the PRO cards
Combining two identical players will result in a PRO card, a better value card that can be upgraded even more and which will have great stats. Never combine two cards unless each is maxed out: otherwise it won’t get to full potential and eventually you will face players with fully maxed cards who will beat yours. It takes a lot of time, especially later on when you have to invest a ton of cards to level them up, but it’s worth all the trouble because you will keep winning this way!

5. Invest in a good goalkeeper
The goalie is important in NHL SuperCard because he gets paired up with other players in some cases. This means that you need a solid GK to keep on winning: level up your GK cards first and if you have a poor GK, just throw away the challenge by teaming him up with your worst card. This increases your chances of winning the other match-ups and still winning the game.

6. Be active in Season Plays
One of the easiest ways to win rare cards and above is to do well in the Season Plays. All you have to do is to make sure that you log in often and replenish the energy of your starting players (or at least switch them with the reserves) and you will do great. Check back every 2-3 games to make the required changes and you will win a lot of great cards, guaranteed! To maximize your chances of winning, it’s always a good idea to start a Season when you have at least 6 Energy Cards.

7. Your Team Tier matters!
You get better potential rewards by being in a better tier with your team, but just meeting the requirements for Ultra Rare + won’t mean that you will get better: always try to keep your meter in the upper side of the bar because that makes you one of the stronger players in the tier. If you’re just starting and your bar is filled just a bit, it will most likely mean that all the opponents that you’ll get will have better cards than yours. So keep an eye on your tier meter, be patient and gather better cards, train them and enhance them and go to the next tier when you have a strong team.

8. Only Enhance PRO cards
This one’s pretty obvious: you lose your enchantments if you combine cards, so wait to get those pros to max them out!

These would be, for now, our tips and tricks for fellow NHL SuperCard players. If you have some new strategies to add to the table, let us know by commenting below!