In 2004, Nexon had just begun to climb into popularity among PC gamers with the recent launch of the original MapleStory. From there, Nexon tried out many different genres of online multiplayer games, and one such series aimed to bring racers from all around the world together!

Enter Crazyracing Kartrider, a fun and colorful take on the popular kart racing genre. The game quickly became one of the most played games on PC. Even though it never left Asia, the game eventually saw a worldwide release on iOS, but that version was eventually shutdown as well.

And now, we are back again: KartRider Rush+ is a new and remastered version of the original game, rebuilt for the mobile platform and for modern audiences. Get ready to race again, because the legends are back!

KartRider Rush+ features fast and frantic kart racing action: drift around corners to take them with speed, pick up items to give yourself an advantage over your opponents, and take the races online with global multiplayer!

KartRider Rush+ features a plethora of different modes that are each suited for different styles of play. Try out the Story Mode where you play as Dao and his friends as they race against the evil Pirate Captain Lodumani, or try out Arcade Mode to race against the world in fun modes like Item Race, Infini-Boost, and more!

When you are feeling comfortable enough, try out Ranked Mode where you will go head-to-head with other players online. This mode emphasizes skill over items, so bring your A game! If you want some practice before you jump online, you can also try out Time Trials to get more familiar with the tracks.

KartRider Rush+ releases at the end of the month on May 31, 2020 for iOS and Android. Pre-register now on the official Nexon website. 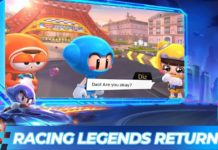