There’s a brand new figure in The Simpsons: Tapped Out and it’s definitely one I wasn’t expecting to see brought to the game anytime. We’re talking about renowned professor Stephen Hawking and he’s here to bring us a lot of excitement and new gameplay elements!

Join Professor Hawking as you explore the secrets of black holes, stop an army of robots, and listen to his lecture on string theory… Featuring dimensionally different duplicates, futuristic architecture, and more!

In other words, there’s a lot of new science-themed content in the game and your Simpsons: Tapped Out adventure will get even better now with the new quests and content. Plus, it’s not often that you get the chance to meet Stephen Hawking, even in a virtual format.

The update should be available right now as a free download on Android and iOS, so make sure you download and install it to bring some science to your Simpsons adventure and see what Professor Hawking has to teach you about string theory. Because, yes, you must know a thing or two about it as well to impress your friends when you’re out having a beer or ten. 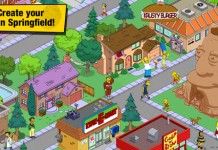 The Simpsons: Tapped Out Gets New Halloween Update, New Costumes And Challenges Added