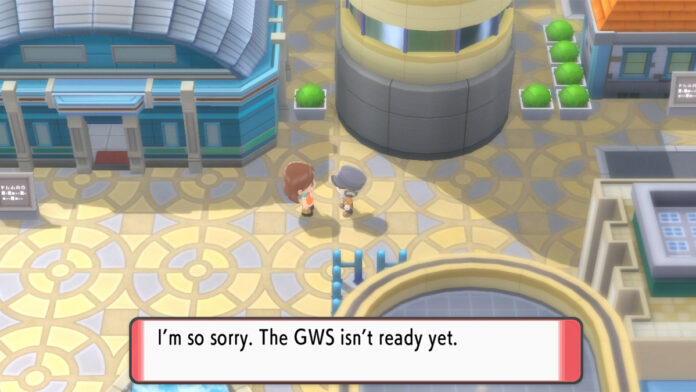 The GWS or Global Wonder Station is a much-anticipated feature of Pokemon Brilliant Diamond and Shining Pearl. This large building in Jubilife City replaces the Global Trade Station of the original games. The GWS was not available at the game’s release, so many fans are wondering exactly what it will bring. Let’s take a look at what we know so far!

What Will the GWS Add?

Since it hasn’t been patched in yet and The Pokemon Company has yet to release any detailed previews, all information about the GWS is speculative at this point. In fact, an NPC will block your path if you even attempt to approach the building.

That said, players have found ways to exploit a glitch to get past her and actually enter the GWS building, shedding some light on what we might expect once it is finally added. While anything found out this way could still be changed prior to the GWS’s actual release, there’s a good chance that at least some of the features mentioned will stay in.

One interesting tidbit comes from a bit of text that pops up when you talk to the GWS receptionist. The text mentions that players will be able to customize their “personal globes” by making Wonder Trades on the GWS, hinting that the new feature will probably have a much more concrete way of tracking just where your traded Pokemon came from.

For those not in the know, Wonder Trades are a fairly old mechanic that allows players to select a single Pokemon and blindly trade it with another random person. Though you can get something fairly dull like a Bidoof, it’s possible to use wonder trades to get many new Pokemon, as well as breeding rejects with rare abilities and fairly high stats.

Another potential new feature is hinted at by more of the receptionist’s dialogue. Specifically, she says that Wonder Trades conducted in the GWS allow players to select a specific region of the world to search for a trading partner in. While we don’t yet know exactly how this works, it’s possible that players will have a much easier time finding foreign Pokemon this way.

So What Will Be Added With the GWS?

That’s all we know so far! Hopefully the GWS will be brought online soon so we can take a closer look at what it offers!