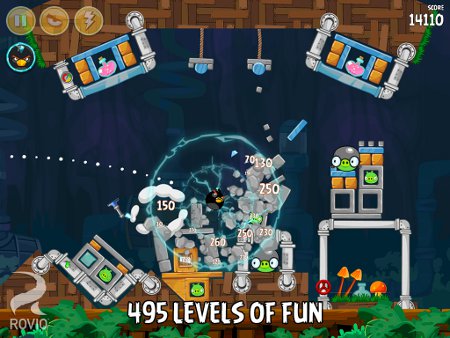 With so many Angry Birds games getting released, it’s easy to forget the game that started everything a few years ago.

Lucky for us, Rovio never forgets. A really good thing, considering that by updating the game ever once in a while, the team also adds some nice features and brand new stages for free.

The original Angry Birds game has now been updated on iOS. The new update, now available for download in all regions, adds 30 new levels into the game and some other small new features.

The new stages are set in the pigs’ laboratory. Useless to say that you will find more objects to smash and piggies to defeat. In order to be more destructive than ever, the Bomb Bird can release an electric wave to increase your destructive capabilities. As if these not so friendly birds even needed another tool of destruction.

Included in the update are also some new potions that will change the birds’ appearance. These are only cosmetic changes but some gamers will definitely love to get their appearance suit the destructive theme of these new stages.

Make sure to download the Short Fuse update for Angry Birds if you still enjoy the game. The new stages are particularly interesting and quite fun!

Angry Birds is now available for download on the App Store. The game can be played on both iPhone and iPad.