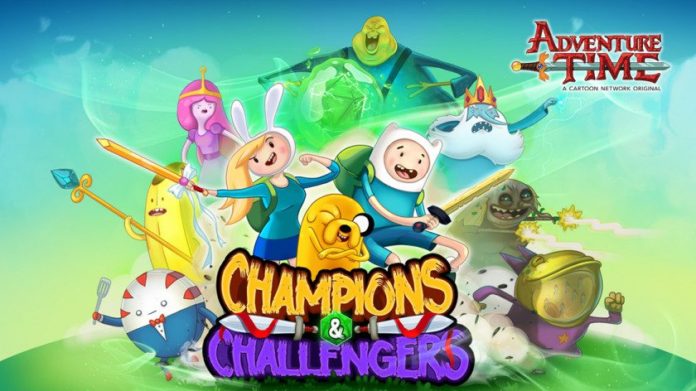 Adventure Time fans will be extremely happy to hear that Cartoon Network and YesGnome are hard at work to deliver Champions and Challengers – Adventure Time, a brand new mobile game featuring your favorite zany characters.

The single player story follows you on a quest to liberate familiar faces from the Land of Ooo, all captured by Dice Lord. But you’ll also get the chance to test your skills and cards against other players in real time battles.

Champions and Challengers – Adventure Time mixes card collecting mechanics with turn based RPG elements, resulting in a really interesting and fun final product. Not something you haven’t seen before, but at least an Adventure Time game you’ve never seen before.

Each character you get will have different skills and it appears that there will be some sort of affinity bonuses involved, such as combining the special abilities of different characters for destructive results.

The game is scheduled for global release sometime this fall, on both iOS and Android, but those owning an Android device can pre-register and be notified when the game launches. All that magic can be done here.

Here’s a bit of the official description, presenting some of the characters that will make their way into the game and other details:

COLLECT 70+ CHAMPIONS
Play as the greatest heroes and villains from across the Adventure Time Multiverse! Team up with Finn, Jake, Princess Bubblegum, BMO, Fionna, Cake, Marceline, Young Billy, LSP, Farmworld Finn, and so many more!

FIGHT IN REAL TIME
Command your team in real time! Develop a winning strategy to crush your opponents in tactical turn-based RPG combat. Use simple gestures to summon mathematical attacks! Bust out special Tricks and Artifacts to do even more damage!

PLAY PVP
Seek you glory? Battle other players in the PvP Arena! Rise up the ranks as you dominate the leaderboards with your warrior skills. Upgrade your champions to unlock even more powerful attacks and claim bigger victories!