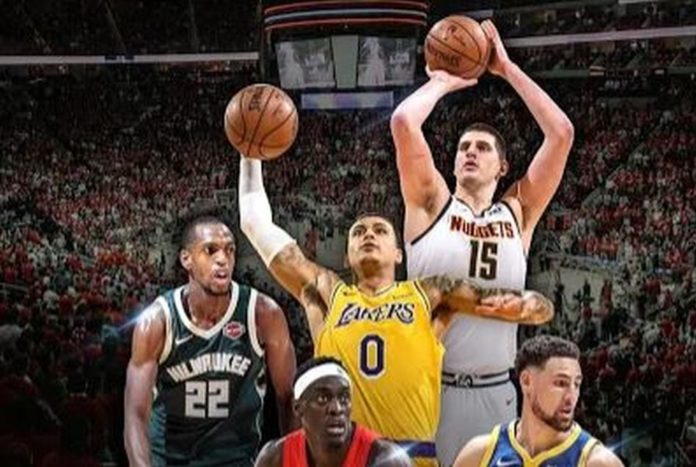 In today’s article we are going to cover all of the NBA Now tips and cheats that we have gathered so far and share them with you so that you can form a good team full of your favorite NBA players!

Now if you are a NBA fan, you might find yourself addicted to this game because in NBA Now you are tasked to form your own team with your favorite players and train them, make them stronger and better at the game and even more than that – you are in control of how they play and what they do out there on the field!

So let’s not waste another moment and dive right into the NBA Now tips and tricks and learn how to win all the games and put together a good team!

Learn and practice the basics

It’s important to perform the right action at the right time, so that’s why you should train quite a bit before anything else. You can train to master these 5 basic moves even after the tutorial, by heading on to the Game tab (bottom side of the screen) -> Training Course.

There you will have the moves:

– Shoot: The shooting will focus on how you can shoot – it’s basically the player that you control performing a jump shot. You will have to tap and hold on the button, and when your indicator reaches the yellow part of the bar, you should release for a more accurate shot!

– Drive: Driving can be performed when a player is heading towards the basket. If you hold this button then, the players can perform various special moves, such as a layup or a dunk when they have the opportunity.

– Pass: Passing is a pretty important step during the matches, and that’s exactly why controlling it is super important. You can use passing between players to reach the best scorer in your team or to take advantage of the enemy’s weaker defense and perform a Drive.

– Shot Defense: Shot Defense is one of the two defensive moves which your players can perform while defending. This move is best performed by tapping the button right before the opponent will try to score. At that point, your player will try to jump and block the shot.

– Lockdown Defense: Much like the Shot Defense, the Lockdown Defense is a defensive move which will let your player try and avoid the enemy’s Drive – look at it like a counter-move to the Drive (useful in PvP matches).

My tips for when to better use the moves:

– Some of the players (which are good at shooting especially) will score the ball even if your releasing timer is a bit off, so don’t let that throw you off entirely if you miss the yellow gauge sometimes.

– The Drive works better if a player has a better ball control ability, because then they will be more comfortable to perform more fake moves.

My favorite one would be the last, because that one will be more accurate in my opinion and you can do it in just the split of a second.

– The good thing about Shot Defense is that you can keep holding the button down and it will affect the opponent player’s scoring rate – a.k.a. it will make the opponent miss or have less accuracy in their shot.

– I almost always use the Lockdown Defense, because that will automatically force the opponent to pass more often and eventually try to score, which is when I go for the Shot Defense and try to either get a good rebound or just to steal the ball by continuously holding Lockdown Defense.

Save 300 Coins to try and draft some good players

You will be able to receive and claim some Coins from your in game Mailbox (tap on your profile in the upper left corner of the screen) and then select the Mailbox, or by completing various tasks in game.

You should have around 300 or more soon after you start playing the game if you follow all the quests, so do this and then head on to the Draft tab (bottom side of the screen) and select the Premium tab.

There you will be able to perform the very first draft, the Superstar Draft. There you will have to tap on the Pick 10 and pay 300 Coins for it, because that one will actually give you 11 drafts for the price of 10! So it’s definitely super worth it.

Once you did that, you can then tap on the left or right arrow (either one, just tap once) and you will be able to do your GP Draft. The chances of getting super good S players from this are lower, but it costs GP so it’s way easier to do than the Superstar Draft which costs Coins (premium currency).

Do your daily free drafts

The daily free drafts are also super useful because you can draft some A-rank players (which are also useful-ish) which are pretty OK, such as Tobias Harris, Andre Drummond, Jayson Tatum and Khris Middleton. Those will be OK if you train them a little, but it’s not just about that – it’s the fact that you get some free drafts which are super useful.

So do your daily free drafts of Prospect Draft, Star Draft and Superstar Draft whenever they are available because soon enough you will find yourself having some super players on your team!

Do your Daily Goals!

The Daily Goals are the equivalent of the daily missions in every other game – they will give you various rewards for doing certain tasks in game, so make sure that you check them out every day and do them, before they reset.

They will help you gather a lot of EXP to level up, Activity Points (which add up to the daily rewards) and those will give you various rewards, from EXP Boosters to Coins and even free Superstar Draft x1 once you complete all daily activities!

Waive goodbye to the players you don’t want

Now that you’ve probably drafted one too many players, out of which you will end up using only a few, it’s time to use the old ones to something useful which will help you improve your current roster.

Basically you can waive the players you don’t want and send them away so that you can get some Player Points. Once you have some players let’s say C Tier players or B, or even A Tier players which you don’t want or will never use, head on to the My Team tab, and there you will see the Roster tab.

Select the Fast Waive option in the bottom side of the screen and then select which tier players you want to get rid of. That will automatically send them away and give you in return Player Points which you can spend in the Player Exchange shop.

Here you should definitely buy the Season ’20 Eastern Draft / Season ’20 Western Draft packs because those don’t cost a lot and they will give you a chance to get a good S player from one of those teams (Eastern or Western).

Check these out and make sure that if you have extra Player Points, you exchange them because for some items there is a daily exchange limit of 1, so if you want them, you can purchase them daily!

Improve your team by improving the Coach

No matter which team you chose to play with, your coach will be one of the most important assets after the players. You can head on to the My Team tab and then tap on the team’s coach icon. There you will be able to pay some GP from the Set Strategy tab and select from various game strategies.

You can try them all out in normal matches, to see which one works the best with your current players, and when you finally acquire all the players (assuming all star players) that you want to your team, then you can start polishing the strategy which your team will stick with.

Every single day that you will log in to the game you will be able to claim useful rewards and player packs which will give you free players! I really suggest that you do this even if you won’t play the game that particular day because on the 30th day that you log in you will be able to claim 240 Coins – that’s only on the 30th day – up to that day, there are plenty of other useful rewards!

These would be all of our NBA Now tips and tricks that we have for you right now! What other good game tips and tricks do you know and would like to share with us? Leave them down in the comments section below and also let us know which are some of your favorite players! (I’d definitely have to go for Giannis and The Beard!)