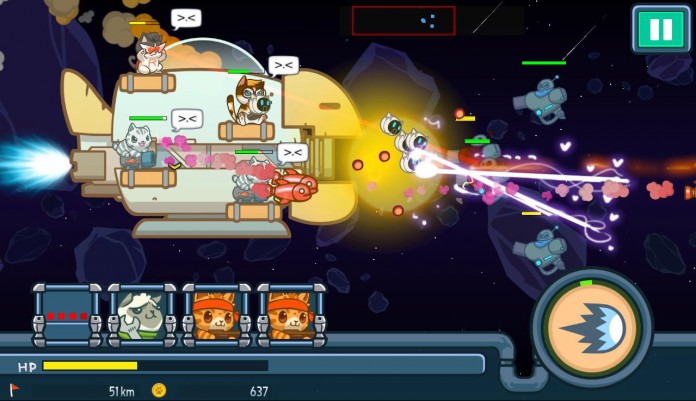 Naughty Kitties is a very interesting mix of two of the most popular mobile games genre: endless runner and tower defense.

The main goal of the game is to keep defending your airship as long as possible from the assault of flying robots. To do so, you will employ several kitties who are anything but sweet and weak.

As in endless runner games, players will be able to purchase several upgrades that will help the kitties in defending their ship for longer, improve repairing capabilities and much more.

If you’re just starting out and want to learn more about this nice little game, you can keep reading for some helpful tips and tricks.

As in many other free to play titles, you will only be able to play as long as you have enough energy, represented in this game by hearts. Once all your hearts are used up, you will have to wait 15 minutes or simply purchase some extra ones. There’s another siple trick that will allow you to obtain hearts without waiting. Simply move your device’s clock 15 minutes ahead and you’ll get an extra heart.

As much as it seems obvious, the clock trick also works with the Daily Bonuses. In this case, you will simply have to move the clock ahead for as many days as you want. Once you have received your daily bonuses, you can also set the clock back to the current time without loosing anything you have obtained.

When starting to do some upgrades, it’s a good idea to prioritize the alpaca’s upgrades. This will allow you to keep going on for longer, as repairs will be faster. Consider updating the weapons only after this, as an improved firepower is not guaranteed to make you go longer.