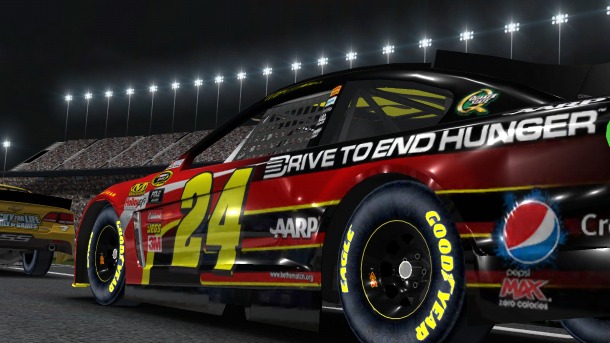 Fans of racing games have had to make do with slim pickings when it comes to mobile gaming. However, Eutechnyx, the developer behind NASCAR The Game: Inside Line, is setting out to change that with a unique new approach to racing games that’s available exclusively on iOS devices.

Titled NASCAR: Red Line, Eutechnyx’s new iOS game isn’t necessarily a mobile version of Inside Line. Instead, Red Line allows players to step into the role of both driver and crew chief as they manage several elements of a racing team’s career. While certain racing moments such as making a crucial pass or avoiding a nasty crash are played from the driver’s perspective, the meat of the game is in the management of your team outside of the racetrack.

Working your way through beginner races allows you to acquire sponsors, bring in cash, and purchase upgrades for your car which in turn allow you to compete in more challenging races. Which upgrades you buy is a crucial factor to consider as certain tracks are more suitable for certain kinds of transmission, tires, brakes, and suspension. Once the race begins, you can choose what kind of approach to take: do you want to be more aggressive and risk damaging your car? Or do you want to take a more conservative route that might cost you the lead? Is gunning for first place worth the tradeoff of having to make more frequent pit stops? It’s all up to you.

Car upgrades are purchased using Red Line’s virtual “E-Bucks” currency which can be both earned in-game and purchased with real cash. While it isn’t your typical racing sim, NASCAR: Red Line does manage to show that, even when you’re not directly controlling the racers themselves, racing is still a tension-fueled adrenaline rush that’s about much more than simply going fast.

NASCAR: Red Line is available now on the iTunes app store for $4.99.