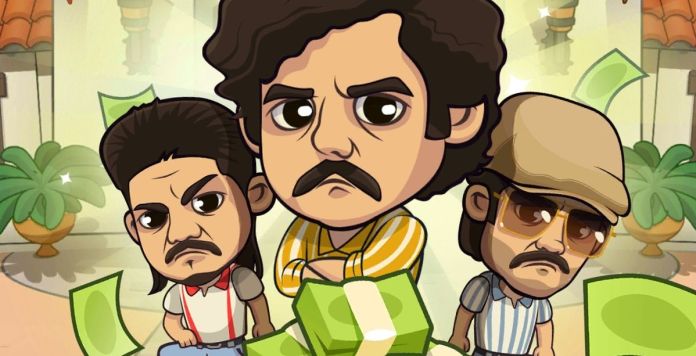 A casual, idle game based on the popular Narcos TV series has just been launched on mobile. Titled Narcos Idle Cartel, the game challenges you to run your own operation with the help of characters you know from the series and get filthy rich in the process.

We’re here to help make it happen fast and easy by sharing some Narcos Idle Cartel tips for beginners in our complete guide to the game. Yes, this is more casual than the previous mobile game based on the show – Narcos Cartel Wars – but some extra help never hurts.

With these in mind, let’s not waste a single second and instead let’s check out below some Narcos Idle Cartel tips, tricks and cheats!

Keep an eye out for exclamation marks!

Exclamation marks are really important in Narcos Idle Cartel because they help you understand how the entire workflow of the production is working. If there is an exclamation mark, it means that the respective area needs a few more upgrades to function properly.

You basically have three main areas in the game that can and have to be upgraded:

You must find the perfect balance here and make sure that you always deliver at least as many materials as are needed by your workers, and then have enough carry capacity to take those goods and turn them into cash.

Most of the time, you will want to work on upgrading the Market and Stockroom first in order to make sure that you have a nice flow, then focus on maxing out the various Workbenches that you have unlocked.

Upgrade workbenches from bottom to the top

The general rule of thumb when it comes to producing goods is that the higher level workbenches (those toward the bottom) will usually generate more income.

This is why us here at Touch Tap Play recommend upgrading from the bottom to the top. This way, you make sure that you get the most value for the money you invest.

Another important thing when buying workbench upgrades is to make sure that you keep the “Huge production bonus” increases in mind. These are offered when you reach a certain level milestone – like level 25, 50, 100 and so on. Whenever you reach such a milestone, that particular workbench will produce a lot more resources.

Upgrade your Products for extra money

While you will generally get more resources from workbenches toward the bottom, you don’t have any control over the type of item they produce: these are all randomized in each chapter.

But you can level up individual items – and you should do that – in order to get an income boost whenever and wherever you produce that item.

In order to upgrade the products, you will need both a specific number of cards for that product, as well as influence points (guns) to upgrade.

Early on you won’t have a lot of micromanagement to do because you will only have a limited amount of cards available, but as you progress through the game, you will start to get a few headaches and decide what to upgrade and what not.

There are tens of products that you will eventually have in Narcos Idle Cartel and never enough resources to max them all out. This is when you will have to start focusing on the rarest ones – level them up whenever you have the chance, in order to get a boost of income.

Another strategy to use would be that of keeping your cards and influence in the vault until you start a new chapter. When that happens, tap the Product upgrade button in the lower left side of the screen and level up the products that you will use in that particular chapter.

This method ensures that you will actually spend your resources (especially the influence points) on things that will actually influence your game – at least for the duration of one chapter. This is the recommended method to deal with things, too.

Unlock a new area before quitting the game

You unlock areas for new workbenches in batches of 5. But for each new area, you need to complete some specific quests related to that area (usually producing a certain amount of items from the previous areas) but also spend some time waiting to actually unlock it.

It would be best to look at these requirements to unlock a new area and work on getting that done ASAP. If you manage to complete the requirements before you log out of the game, you can start working on unlocking it while you are away from the game.

In most cases, it won’t be easy to get to that first area (or a new one) in a single go, but try to plan your game time in such a way that you start working on an unlock before logging out for a longer period of time.

Whenever you complete a new chapter, you get a Prestige-like bonus. This consists of you tapping the screen as fast as possible for a limited amount of time. Based on how much you tap – and how many times you fill up the progress bar – you will receive special cards as a reward.

You will see, though, that filling up those bars becomes more and more difficult as you go up the chapters. But you can increase your tap power by upgrading in-game character cards.

There might be more who help you with that, but one of the starting characters surely does it: Felipe is an Epic character that you receive early in the game and leveling him up will increase your tap power. Do so as soon as you have the chance in order to massively boost your rewards after each chapter.

And once you are there, make sure to use at least three fingers to tap the screen as fast as possible. There’s no better thing than free cards for you!

Check out the shop for extra cards & chests

Tapping the shop button will take you to a place where you will be able to spend your premium currency in all sort of ways for all sort of things.

But you also have the chance to spend some more regular resources on things you might really need in the game. For example, you have the Cards section where you will get a new set of cards that you can buy with influence points (guns).

You can also spend influence points on a Bronze Briefcase or various Manager Cards.

While the Influence Points are not easy to get and you do need them in multiple important areas of the game, it doesn’t hurt to keep in mind that you can also put them to good use in the game’s shop.

And since we’re here, don’t forget to claim your free Cash: just scroll down to the bottom of the shop, where you can Claim up to 15 cash for free if you follow the game on Twitter, Instagram and like it on Facebook. It’s an offer you can’t resist!

Hoard that cash up and wait until you have 400 – then purchase the amazing Gold Briefcase which guarantees 3 epic cards and 10 rare ones, from a total of 25+ cards and other goodies. Worth waiting for!

If you feel that your coffers are filling up way to slow, you can – and should – watch a video ad in order to boost production. Simply tap the icon at the bottom of the screen and watch a quick ad to double production.

You can even watch it a few times in a row to add 4 extra hours with each ad you watch in order to make sure that you’re always running at maximum speed in this area. This will help you progress through the levels a lot faster!

Get the influence bonus from the pigeon

Every now and then, a pigeon will land on the roof of your Stockroom. He’s a very special fellow with a very special offer: you can watch an ad to get some free influence points. Make sure to accept that offer because you won’t often see the pigeon!

Finally, since we’re taking ads, have in mind that you can always watch an ad after being away from the game for a while and double your offline earnings. This is best done when you spent more time away from the game – for example, after your night’s sleep.

There are a bunch of managers that you can earn in the game. You can place them in one of the three available spots: to supervise the stockroom, the market and the Workbenches.

You have three default managers you start with which do nothing more than just automate each area, but you will want to replace them as soon as possible with some more special managers.

You should always use the less common managers since they have the better boosts. Also, you should plan your upgrades in advance and get the discount ones when you want to buy, then switch over to a manager that boost production or income in order to always run at maximum capacity.

This only takes a little time but helps a lot overall, so it’s something you should pay attention to.

Choose wisely when to move to a new chapter

In order to move to a new chapter, you have to complete a number of missions. But even after completing these missions, you can keep on playing for a while longer in order to complete even more missions and grab more rewards.

In most cases, it’s best to be patient and not rush to a new chapter: the rewards you earn from these missions will make it worthwhile, with new cards to be won or influence or premium currency.

Only move on to a new chapter when you’re certain that you have completed as many missions as possible (or when there are no missions left).

These would be Touch Tap Play’s Narcos Idle Cartel tips and tricks for fellow players. If you have additional advice to offer, don’t hesitate to do so by commenting below.