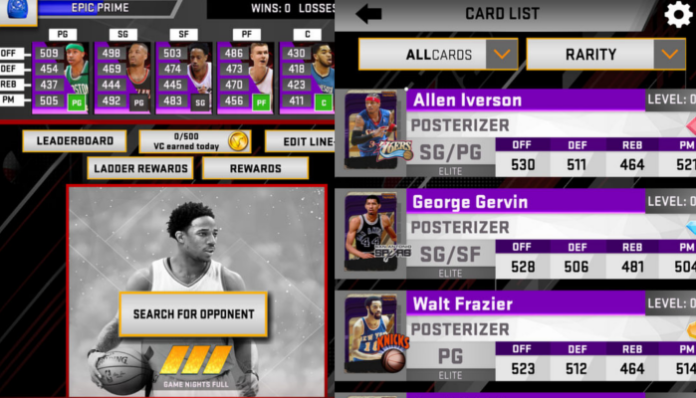 NBA 2K18 comes to your favorite mobile device in the form of My NBA 2K18! This pocket-sized version of the game has you collecting your favorite franchise player cards to create an all-star lineup! You can even connect the mobile game to the console or PC version to transfer virtual currency! Our My NBA 2K18 cheats and tips will help you built the ultimate team.

My NBA 2K18 lets you bring the premiere basketball experience with you on the go, so there’s still a lot of challenge here! Let’s not waste any time and get started with our My NBA 2K18 cheats, tips and tricks strategy guide!

One of the best – and free – ways to get new player cards is to complete the Mission Tasks. Completing a task will reward you with tickets, and you can spend tickets in the aptly named Ticket Store. The Ticket Store sells mission packs for as cheap as 25 tickets and as expensive as 300 tickets. The more expensive pack you buy, the greater chances of drawing an ultra rare or maybe even elite card.

Signing into the game at least once a day will grant you login rewards. You can get VC, but the coolest thing are the free reward packs. At four logins, you’ll get a free card that’s either uncommon or rare. At eight days, you’ll get a guaranteed rare and up to ultra rare card! If you can mange to log in at least twenty times in a month, you can get anywhere from an ultra rare card to an elite card!

Try to make it a habit of opening the game every day if you’re on the hunt for awesome player cards. Be warned – your progress is reset once a new month starts, so you’ll need to keep on top of it to ensure that you get all of the great rewards.

Make sure your cards are in the right place!

There are five positions for your players, as you’ve probably noticed. From left to right, there’s the Point Guard, Shooting Guard, Small Forward, Power Forward, and Center. While you don’t need to know the exact workings of each position, you DO need to make sure you’re players on are in the right spot. If your players match the position they’re in, they’ll gain a stat boost and expend less energy in playoff games.

So you’ve gotten a rare or better player card. What now? Take ’em to then ext level – literally! If you’ve got two copies of the same player card at maximum level, you can combine them to create a “Pro” version of that player card. The pro player has dramatically increased stats and higher ability trigger chance. Do this whenever you can to create some super tough players!

In the event you max out a pro player’s level, you can supercharge them. Supercharging a pro player will increase their level cap, letting you train up the ultimate player!

Be sure to keep training!

Once you’ve gotten a good amount of rare player cards, you’ve probably amassed quite the number of common player cards. You can sacrifice players cards to grant experience and levels to a card of your choice, and this is the main method of powering up your team. You’ll need to do this a lot to make sure you keep up with the competition.

That’s all for My NBA 2K18! Play to your players’ strength and you’ll be fine! If you’ve got any other tips or tricks to share, let us know in the comments below!