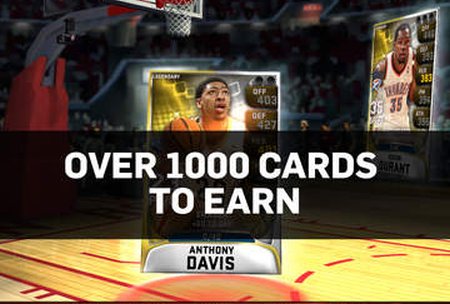 2K finally released the brilliant card collecting game My NBA 2K15 (or MyNBA2K15, because that’s how they like to write the title) and I am sure you absolutely love the game so far. I am here to share with you a bunch of My NBA 2K15 cheats and tips that will help you win all your games and seasons, and have the best possible cards! We’re talking here, obviously, about the My Team Mobile – the card game part of the whole package.

So no matter if we say that we have for you the My NBA 2K15 cheats and tips or the My Team Mobile cheats and tips below, the truth is that what we’re sharing with you below is going to help you tremendously!

1. Important tip for beginner players
If you’re just starting playing My NBA 2K15, I have an important tip for you: only play Quick Games until you have a decent set of Rares and Uncommon cards. Don’t train any cards yet, just create your best possible starting line up based on the cards that you have. Keep playing against people with very few matches (zero if possible) because they are the easiest to beat. Keep on collecting those cards until you fill up your deck, then select the best 5 of them (priorities are those that can be combined) and start training your top cards. This way you will get a boost and have a decent deck to play wiht.

2. Choose your opponents wisely
The nice thing in the game is that even if you lose, you can still draw a card. But if you win, you can draw two and that’s a big bonus. In order to increase your chances of winning, pick up your games wisely: look at the number of total games played (Wins + Losses) and choose those with the least. If a player has more losses than the others, it also proves that his or her deck might be easy to beat, so choose those first!

3. Train, then Combine!
One extremely important thing to remember in the game is that, for the best results, you should first train your cards to maximum levels before combining them. This way, they will get better ratings when you level them up and you will have an advantage over those who didn’t train them to the maximum level before turning the cards PRO.

5. Use the right boosts
There are a bunch of boosts available in the game and using them correctly might win you the game. I would personally suggest not to use a boost in the first two matches because that’s when the opponent usually uses them: keep them for later on, when you will get poorer players into play (and when your opponent will do the same) – you might get the advantage over them and win the game! Also, try to have boosts that cover as many skills as possible!

6. Play the tiers right
Tiers are also extremely important in My NBA 2K15: the better the tier, the better your chances of scoring a top card, but if you’re not ready for that tier, you will find it difficult to win games. For example, you have more chances of winning if you are at the end of the Super Rare tier rather than just starting the Super Rare Plus one. This is also extremely important in season plays: the closer you are to the right margin of the tier, the better your chances to win that season (since your deck is better). So stock up on cards to use for training, and train them with an eye on your tier rating!

7. Stock up on Energy before starting a season
If you start a season with a full set of energy, you have better chances at winning it. Energy allows you to keep your starting players at top energy (maximum stats) and therefore gives you more chances to win the games and the season. So always start with 20 energy and log in regularly to fill up the stamina of your starting players AND play quick games to get more energy.

8. The winning cheat
If you don’t want to see many losses under your name, there is a cheat that you can apply: whenever you are about to lose a game, simply quit the app and remove it from the cache. Start the game again and your previous match, the one you were about to lose, will not be counted. This doesn’t help much, though, as a lost game gives you the chance to draw one card, while doing this cheat just wastes your time. But if you like to have as few losses as possible, this one’s for you!

9. Only enhance PRO cards!
I am sure that you can’t wait to use your enhance cards on your players, but my advice would be to only use them on Pro cards. If you’re just starting wait to get at least a Rare PRO card before enhancing, because you will use that card for a longer time. Otherwise, you’d be just wasting the enhance cards because uncommon or non-pro cards will soon become too weak to keep in your deck.

These would be for now our generic My NBA 2K15 tips and tricks. I am sure that they will help you get a better deck (basically, if you respect the tip #3, you are all set!) and that you’ll keep winning your games! 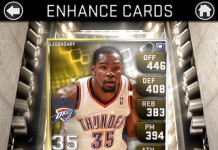 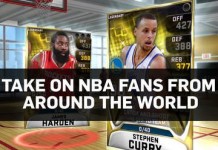 My NBA 2K15: How to Get Super Rare, Epic and Legendary Cards Faster