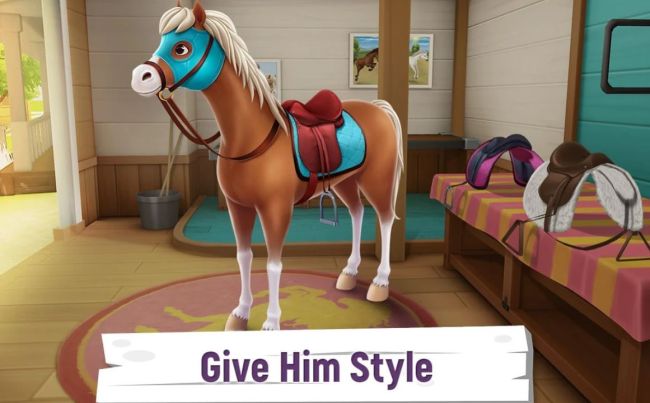 In today’s article we are going to cover all of the My Horse Stories tips and cheats to help you win all of the horse races and rebuild the farm!

I will have to be very honest – the game, as cute as it looks, it is much more difficult in reality as you will have basically Stamina and such and you’ll need to be quite aware of how you spend it. The game’s story is quite beautiful, and if you want to unfold it, then you will have quite a lot of game to play though!

And if that is your goal, then you came to the right place! Because we are going to cover all of the My Horse Stories tips and tricks and help you rebuild the farm and teach you everything you need to know about the game, as well as things that you should – and should not do!

So without further ado, let’s not waste another moment and dive right in!

So basically the game will have a list of missions for you which is located on the left side of the screen, and it looks something like a notepad. Tap on that and start working on the missions which you have there, even if it takes a lot of time.

If you are OK with spending your Gems however, then you can buy Gold and whatever else the game requests by using Gems, but I do not recommend doing this. That is because later on you can use the Gems to buy premium outfits which will give you some bonuses.

Focus on the missions

The missions are super, super important, so try your best to stick to them. I am probably repeating myself, but if you have tried to do something that the game didn’t require you to do just yet, then you’ll have to re-do it, so try to just do it once when you are asked.

By finishing various missions you will gain EXP which will let you level up, and also gain some Coins, so it’s super useful to do them (and not forget to claim the rewards) especially if you are running low.

As you are diving right into the game, the one thing that you will begin with fairly early on is choosing a horse. Now there are two horses which are premium horses (each costs 10 Gems), but it’s not mandatory that you start with them, because it will all essentially come down to how YOU play.

So if you want to save up on 10 Gems, do not invest in getting these starting horses because if you still fail the jumps, the horses won’t make any difference. I went for Shadow (the black horse) and if you are not really after how the horse looks, whether it’s brown, white or black, then you can go for a normal horse which costs Gold instead of Gems.

Play it cool until you unlock the training ground

One of the things which you will unlock fairly early on, is the training ground which let you train your horse and get more Stamina or improve their Jump ability. There are a few things which I have to point out about this, so pay close attention to them because they are important!

– Do not go ahead and unlock the training grounds before the quest asks you to.

– If you unlock the training ground to get some Stamina beforehand (because you might need to get extra Stamina early on to compete again and progress through), then do not try to rush the training because you will need it for the quest Improve Your Horse’s Skills.

– If you do this beforehand, then you will need to do it again since it won’t count.

So try to not go above and beyond to play the game your own way, and instead just follow what the game’s missions ask you to do because that is the best way to play the game if you want to finish everything and still have plenty of Gems to spend.

When you will get one of your very first quests which will ask you to put on some clothes to impress the judges in the competition, just put on the free riding helmet and maybe purchase one item of clothing.

No matter what you do, do not spend all of your Coins on clothes because you will need the Coins to purchase grains which can be used to feed the horse. If you spend your Coins before that on clothes, then you will have to compete again and you might not have all of the Energy or Stamina to do so, so you will probably find yourself in a stump.

Therefore, just focus on the quests. Do not do anything extra just yet, because the game apparently will not be super kind to you (I know because I tried doing that), at least until later on in the game when you can afford it.

Gain more XP and level up to unlock new items

There are several ways in which you can level up your character, and that is super necessary if you want to unlock more items (and better, of course). Since there’s plenty of ways to do that, I will tell you here how to go about it especially in the early game.

When you are completing the missions, which I have highlighted above, you will receive EXP, and also some Gold (even though not crazy amounts), so it’s a good way to stack up EXP for level up. The missions will reward you with some EXP, but for a full level you will need to complete a few of them, not just 1.

By building various structures you will also gain a small amount of EXP. Do this when you are asked to, but if you want to build ahead of time, that’s OK too because buildings will count towards completing missions. Oh, and when you complete constructing a building, this will give you some EXP (can add up with the missions’ EXP).

Feeding your horse grants some EXP

Whenever you are feeding your horse, you will gain some extra EXP, which will be pretty useful. It will not depend on the type of food that you feed it with, so even if you feed the horse with Wheat or grains, it will still grant you a small +5 EXP.

When you are going to the Greenhouse and planting crops, they will take some time to grow. Whenever you are harvesting them, you will earn some small amounts of EXP.

Any time that you groom the horse it will give you some EXP. Make sure that you do this whenever you want to gather some extra small EXP, because it will have a short cooldown, but it requires water.

Learn how to compete

There are a few things which you need to do when you are competing, and these things will determine if you will end up among the top three and win the race, or end up losing the race.

Some of the smaller obstacles can be passed by simply tapping shortly on the screen, but it really depends on its type. Either way, all of the obstacles will require Stamina, which decreases over time as you advance through the obstacle course.

So for that, you will need to constantly train the horse in the Stamina and level up its Stamina to be able to compete for longer courses. The same works for the Jump option – train that constantly because it will help you deal with obstacles which are higher.

As you compete you will need to spend Energy to participate. One point of Energy will recharge every 3 minutes, so you need to manage it somehow – and if you fail a stage, re-playing it will cost Energy, so try to nail them the first time.

I would suggest that when you are low on energy, just try to feed and train your horse as much as you can, because it will help you in the long run.

Daily Deals is an offer in the Shop which appears under the gift box button. Tap on that and it will start playing an advertisement which will reward you with some stuff for free! You can claim this offer every single day several times (4 hours cooldown) so just make sure that you claim it whenever it becomes available, because it can give you anything, from EXP to resources and Gems!

These would be all of our My Horse Stories tips and tricks that we have for you right now! Do you know some more useful game tips and strategies? Feel free to share them with us down in the comments section below!