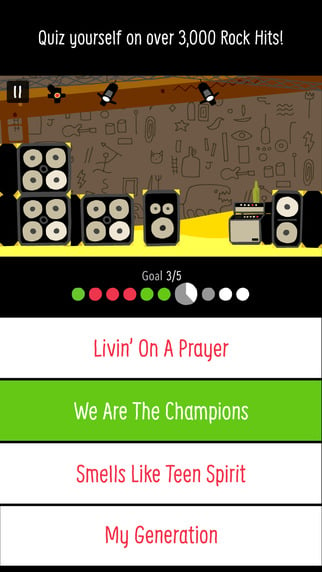 If you are on Facebook, there’s a really good chance you know about SongPop, a musical quiz game developed by FreshPlanet. The team has recently confirmed that a SongPop spin-off game is going to be released next week on the App Store in all regions.

Rock On is going to feature a gameplay experience that’s not too different from SongPop, with players having to name tunes by listening to actual recordings of rock songs. As in SongPop, players will have multiple choices.

Rock On is going to feature quite a bit of content. With the game’s 80 levels, different game modes such as sudden death and quickfire trivia challenge, and over 3000 songs, Rock On will keep players rather busy for quite some time. And if you liked a song you have never heard, you can also purchase it directly from the game thanks to direct links to iTunes.

Rock On will be released as a free to play game in all regions on April 2nd. The game is currently available in soft-launch mode in Australia so you can already check the game out if you have access to the Australian App Store.