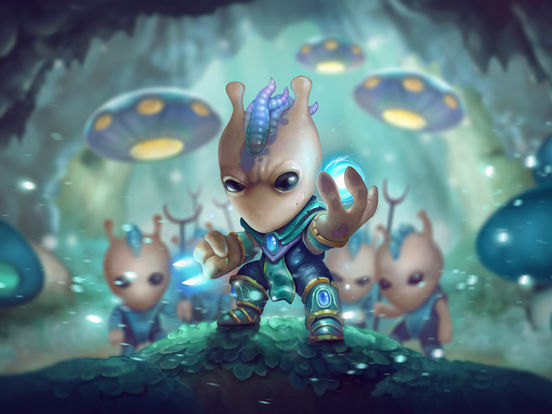 The hit strategy game Mushroom Wars returns with Mushroom Wars 2! In this tactical strategy game filled with fun-guys, you’ll be attacking other mushroom men to claim bases for your army. Take control of the battlefield by employing different tactics, build new types of towers, and take over the enemy! You can even play the game in versus mode against other players. We’ll help you be the ultimate mushroom tactician with our Mushroom Wars 2 cheats, tips and tricks strategy guide!

Mushroom Wars 2 is deceptively simple and easy to pick up, but there’s a lot of strategy involved if you want to win. Read on to find out our best strategies in our Mushroom Wars 2 strategy guide.

It’s usually a good idea to take the offensive than to play it safe. In a lot of cases the outcome of a level may ride on the first couple of seconds! Playing too reserved may eventually drive you to defeat. Send your mushroom men to attack neutral buildings closest to the enemy base. One of the key things to remember is to prevent your enemy from expanding. Your enemy will be severely crippled if they cannot capture bases to produce more mushroom men.

You will learn how to construct defensive towers out of bases a couple levels into the tutorial. Try to have at least one of these around, and make sure it’s heavily fortified. The computer AI has a tendency to react to every single move you make, and they will jump at the chance to take over these towers if you leave them unguarded for too long. Defensive towers function just like regular bases; you will need to station an ample amount of mushroom men to prevent them from being taken over. Be sure you pick a good place for them too. Upgraded defensive towers can really take a big chunk out of advancing armies!

Going off of tip #2, the enemy AI will actually wait for you to make a move sometimes. In the event of a checkmate, the AI will not take any actions and instead opt to build up mushroom men in whatever bases they have. These moments are usually good times to strike, but make sure you’re strategic about it. For example, say you have two defensive towers that are heavily guarded controlled on the map, and the enemy has none. In this instance the enemy AI will NOT attempt to make any sort of move, and will instead wait for you to make the first move. Attack, but don’t attack all at once.

Using that same example, sending all of your units stationed at one of the towers to attack one of the enemy’s bases is probably a bad idea. The second you do so the enemy will immediately move for your tower since it’s wide open. At the same time, do not wait too long to attack, otherwise your enemy will have a stockpile of units to fall back on and it’s going to be a tough uphill battle.

4. Watch for enemy upgrades and movement!

Keep a close eye on the bases your enemy has and try to time your actions around them. Did the enemy just upgrade one of their lower end bases? That means that the base has little to no defense, and it’s a prime target for you. Did the enemy just try to take over a neutral tower? They probably have very few units left after having to deal with getting shot AND taking out the neutral defenses. That’s another great opportunity for you to attack! Remember – the more aggressive you are about taking opportunities, the better you’ll be at the game. You should play the game like a watchful hawk, striking fear into your opponents and waiting for the best time to attack.

That’s all for Mushroom Wars 2. If you’ve got any other strategies to share, let us know in the comments below!