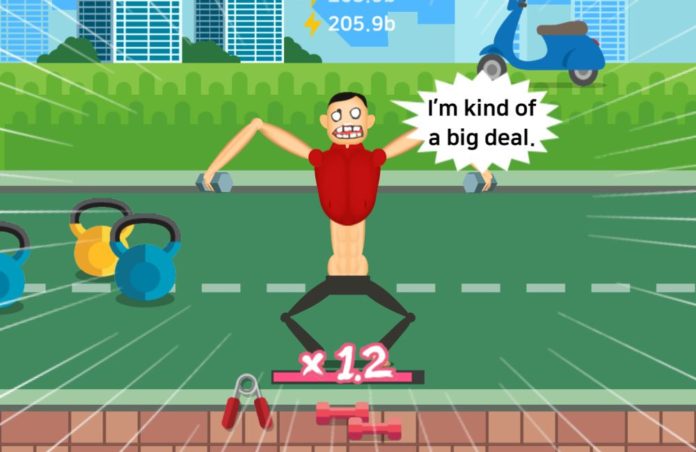 Muscle King is the perfect game for the start of the new year, as everybody wants to get fitter and leaner. And since most of us won’t be able to achieve that in the real life, we’ll be able to do so virtually thanks to our Muscle King cheats and tips.

In our complete strategy guide for the endless clicker / idle game, we’re going to share everything about this great game and tell you how to get buffed and ready to rock the world in order to become the World’s Greatest Organism (because, yes, that’s something you can achieve in the game!).

So let’s not waste a single second and let’s check out below some Muscle King tips and tricks to get the buffest character ever.

Tap with Both hands
This is extremely useful if you want to get a boost of income quickly: tap with all your fingers after placing your device on a flat surface. This goes great with the Tanks minigame as well and you should do it as often as possible. Tapping with just one hand or a couple of fingers won’t give you similarly good rewards.

What and how to upgrade
There are two main categories that you upgrade in this game in order to get Energy which in turn allows you to buy more upgrades and get buffed: Spirit and Muscles.

Spirit influences the amount of energy you get per tap, so you should focus on that if you are planning to spend a lot of time in the game actually tapping the screen. If not, this is still somewhat important to upgrade, but not as important as Muscles.

Muscles not only make your character look tough as nails, but they also generate energy per minute. The higher the level, the more energy produced and you should strive to upgrade these often because, in the long run, this will be your money maker.

I initially wanted to build a funky looking character with no leg muscle, but the truth is that it’s better to just upgrade everything to the same level at once because the prices go up a lot and very fast. Since your main goal is to progress ASAP and get as buffed as possible, this is the best way to go.

Jobs & Finances
There is another thing that slightly influences the amount of energy you’re getting per minute: Properties. They are bought with Dollars, earned from jobs you get. Although not as important, it doesn’t hurt to always make sure that you get the best possible job in the game and evenly spread out your earnings between buying new Properties and Vehicles.

This is a slow process to get some extra resources in the game, but for the long term they add up so it doesn’t hurt to get as many as possible too.

Unlock the boosts
There are two important boosts that you can unlock in the game with Diamonds, each giving you 5 hours worth of energy or money. You should start getting those every now and then, especially after a big boost in your income.

Diamonds are relatively easy to get early on thanks to the achievements. You can also play Mini Games each hour and you will earn some nice amounts of Diamonds. And since there’s not really anything else to spend these diamonds on, it’s better to get the boosts rather than hoard them for no reason.

Mini Games
Don’t forget to hit the Mini Games button above the menu and play the games every hour. They are simple and lack any real challenge, but they will earn you some nice amounts of Diamonds that will allow you to progress faster and get better in Muscle King.

Watch the ads
A funky looking muscle fairy will fly over the screen pretty often: make sure you tap that and watch the ad, as you will get a really nice reward for doing so, usually in terms of extra energy or money – but you can also get Diamonds.

These would be our tips and tricks for Muscle King right now. If you have other strategies or suggestions to share with fellow players, don’t hesitate to let us know by commenting below.