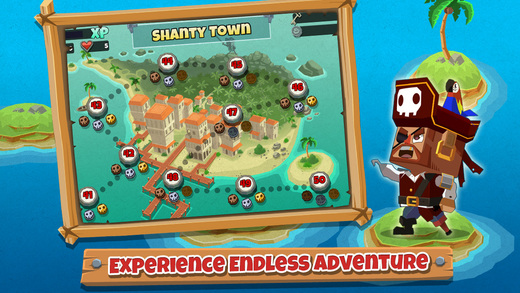 A new multiplayer focused action game is now available for download on the App Store, a game that, while influenced by one of the most successful mobile games, still manages to feature a really interesting gameplay experience.

Pirate Bash, developed by DeNa, is a multiplayer action game that bears more than a few similarities with the Angry Birds series. Unlike the Rovio developed games, in Pirate Bash players will be shooting at one another while taking the role of pirates. During the course of the game not only you will have to be quite good at shooting but also build your crew and more.

Having a varied crew is really important in Pirate Bash, as you will be able to access different weapons that may make your mission easier than before. Before long, you will have a really big crew made up of some unlikely members like skeletons and ninjas. You will also be able to make your crew stronger by purchasing updates.

Pirate Bash is now available for download on the App Store for free. The team is going to continue supporting the game with new updates and content so there will be plenty of stuff to do in the game even in a few months from now.