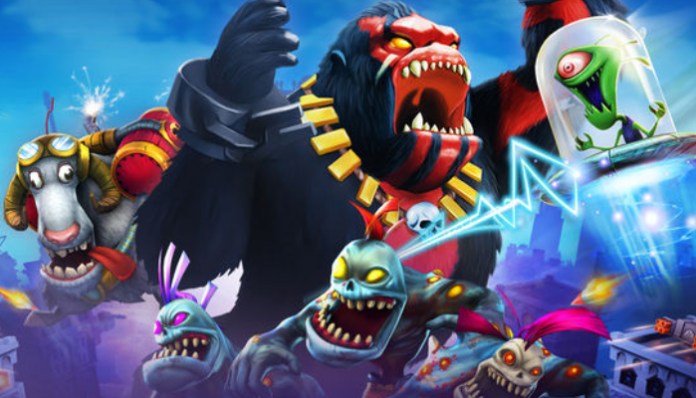 What’s a good metropolis without a good monster to go with it? MonstroCity: Rampage is a base building real-time strategy game akin to games like Clash of Clans. Instead of puny little soldiers though, you’re commanding giant monsters that are skyscraper-sized! Utilize their special powers to leap, smash, and burn other cities into the ground! Our MonstroCity: Rampage cheats and tips will help you raise the ultimate monster team.

If you tap on the scientist’s icon at the bottom left corner of the screen, you’ll bring up the Missions menu. Missions are this game’s version of recommend story quests. These missions will tell you to build specific structures or use a specific monster in a battle, and they’re all geared towards your current level in the game.

Following these missions will ensure that your city stays up-to-date with latest and greatest upgrades!

Completing these missions also rewards you with precious DNA, the currency you need to summon new monsters. Sometimes you’ll even be rewarded with gems, the premium currency of the game. Needless to say it’s very much worth your time to complete the missions!

Build up adrenaline before you assault!

The best strategy to employ is to first find a spot on the city that isn’t defended too well. There will always be at least one blind spot! Deploy your monsters there to have them destroy some random buildings.

Once they’ve built up some adrenaline, let their special abilities loose and attack the defense towers head on. You should be able to take them down faster since your monsters are loaded with adrenaline.

Spend your resources as much as possible!

Your coin and power cap is determined by how many Banks and Power Plants you have respectively. Upgrading them will also increase your cap. Early on, your cap is pretty low, so be very careful not to let any resources go to waste. If you hit your cap while you’re attacking a city, any further resources you earn will simply vanish!

Keep an eye on your resources and make sure to spend them as you get them. It’s better to just start up a random upgrade if you’re getting close to your cap rather than risk anything going to waste.

Use your DNA often!

You’ll often be rewarded with DNA upon completing the story missions and taking down other players cities. While the monster you summon probably won’t be high rarity, you’ll still be able to earn mutagen for your existing monsters.

Mutagen is the main method of powering up your monsters. Every time you summon a monster you already own, you’ll earn mutagen for them instead. With enough mutagen, you can evolve a monster which increases their stats and make their special ability better. Summon monsters often even if you only have common DNA, as you can power up your old monsters!

That’s all for MonstroCity: Rampage! If you have any other tips or tricks, let us know in the comments below!