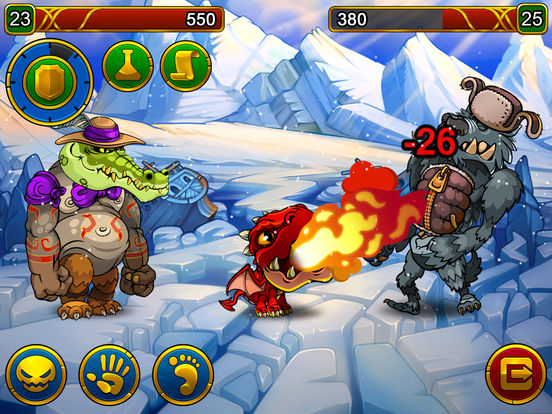 Monstergotchi took us by surprise with its silly presentation but deep and complex game play. Our Monstergotchi cheats and tips will show you how to build the ultimate monstergotchi and expose your enemies’ weaknesses! After being resurrected by a powerful wizard, you can choose from a variety of monster parts to create a fearsome beast. You can be a scarecrow wolf hybrid with frog legs if you want!

You’re probably wanting to get some combat practice so that you can take on the arena opponents, so let’s get started with our Monstergotchi cheats, tips and tricks strategy guide to pave the way for your ultimate monster!

When you’re building your monstergotchi at the beginning, you can choose between three different parts for your head, arms, torso, and legs. The wolf parts inflict physical damage, the scarecrow parts inflict air damage, and the frog parts inflict water damage. While you can build a classic monster using the same parts, we recommend at least using different parts for your head, arms, and legs. You lose the other parts that you don’t choose, so you’ll need to build carefully!

Stay alert for the action commands!

Sometimes you’ll receive an action command during an attack. Action commands are little tap indicators that appear on the screen somewhere. Successfully tapping on all the action commands will make your attack deal more damage, so stay alert!

The most common action command you’ll see are these red target marks that appear on the enemy. You simply need to tap on them to turn them green, but be quick about it. These targets only appear for about a second, and missing them will make your attack on do regular damage.

The second action command is usually reserved for charged attacks. Every time you use an attack, its icon will fill up with red. Once the icon is completely red, the button will light up in flames signifying it’s ready for a charged attack. Charged attacks are just more powerful versions of the attacks, and there’s a special action command for them. On the left side of the screen you’ll see a meter and a green button. Tap the green button as fast as you can to make the meter go up. Filling the meter all the way will make your charged attack do double damage!

Invest some points into your health!

When you level up you receive attribute points that you can distribute freely. Early on, we recommend putting a couple of points into health before your other attributes. The reason being is that you take a lot of damage in the early fights of the game, and the regular health potion only heals a measly 25% of your maximum health. This means that the lower your maximum health is, the less effective the heal will be. Pumping up your health will make it easier to survive and make the regular health potions actually worthwhile.

You can tap and hold on enemies to see their full stats. You can see what kind of damage they inflict and what they’re susceptible to. Always taking advantage of this is key to victory. You need to hit your opponent’s weaknesses as much as you can. When you get to the point where you can afford new monster parts, you can also change up your monstergotchi to take advantage of enemy weaknesses.

Daily Quests are optional quests that you can complete for some extra goodies. Try to do these as soon as you can because they reset every day. Almost every daily quest offers souls as a reward, a precious currency that you use for potions and spells. Some of the quests even offer spells flat out as a reward, so it’s in your best interest to do as many of them as you can.

Those are all the tips we have for Monstergotchi so far. If you have any other monster combining tips or tricks to share, tell us in the comments!