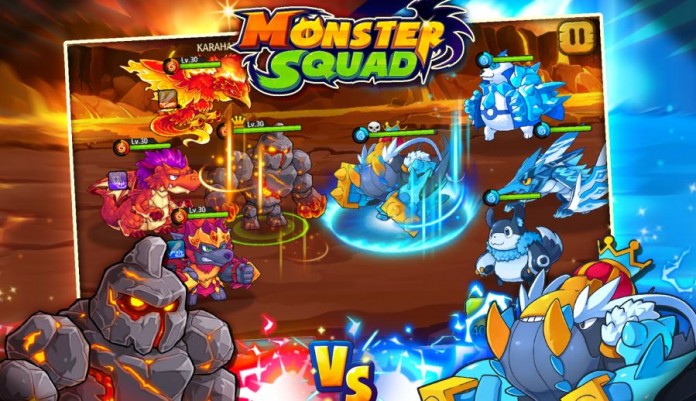 Monster Squad is a brand new monster collecting and battling game created by Nexon, and so far it looks like a truly amazing title that will keep us all busy for at least a few months from now on. But we’re not here to praise the game, we’re here to talk some strategy, which means that this article will give you some Monster Squad cheats and tips that will help you win everything, collect the best monsters and hopefully rule all the Arena battles easily.

So let’s not waste any time and let’s check out below Touch Tap Play’s Monster Squad cheats and tips for a perfect strategy!

Choose your team leader wisely
Probably the most important monster in your squad is the Team Leader since it gives you more control over the skills used in battle, so make sure that you always have your best guy up there with the best skills.

How to choose the best team
With so many monsters available in the game, there are obviously a ton of possible choices that each player will make. What monsters you get is also important, but usually I would suggest as the best possible team an attacking one with at least one healer that heals all other monsters, ideally the leader since that gives you more control over when will you select the healing the healing and have other options to use in the meantime.

Time lapse cheat
Some people are reporting that the time lapse cheat is working in Monster Squad. This means that, if you want to replenish your energy instantly, you should quit the game and go to your device’s settings and set the time ahead for a while. Give it a try and see if it still works.

Add friends
Recruiting friends is extremely important in Monster Squad, just like it is in all games of this kind, so make sure that you do so (maybe leave your code in the comment section below for somebody to use it and for you to return the favor?) Having friends also gives you a lot of other advantages in the game, so it’s always a good idea to have at least a few active ones close by.

Don’t forget your other team monsters!
It took me a while to realize that I can also tap the icons near the monsters in my team during battle so that they can use their skill and it’s not just the leader that has this option. So don’t forget about that – it’s usually a great bonus to have, but plan it well before using it. In some cases, it’s best to wait for a new wave before using it or if it’s healing that we’re talking about, wait for your team to actually be damaged.

Don’t forget about the missions
There are daily, weekly and missions with no time limit – make sure to check them all out on your home screen and you will get a nice set of rewards to help you evolve even faster. Focus on the daily and weekly ones since they are the ones that go away, while the remaining will naturally be completed while playing.

Only boost your top monsters
That one star fire monster you’re starting with might seem to be da bomb, but he’s not. Don’t spend valuable coins and monsters on evolving low level ones and only upgrade your top ones. When boosting, make sure that you are not using evolution material and that the success rate is high. Always boost your best monster and go down from there (because you might get better monsters than your worst in the mean time).

Evolve monsters
After boosting your monsters, it’s time to evolve them in order to supercharge them. Evolving monsters in Monster Squad is pretty difficult because the requirements to do it are other monsters, which are usually difficult to get. Make sure that you know exactly what monsters you need to evolve the ones you want to evolve and keep them safe. After a lot of grinding and some good luck, you will get exactly what you need and you will be able to evolve your monsters for the added bonus.

If you remain active and play the game daily, you should have no problem creating a super squad really soon and getting the most out of this great title. And don’t forget, if you have other Monster Squad tips and cheats, share them with us in the comment section below!