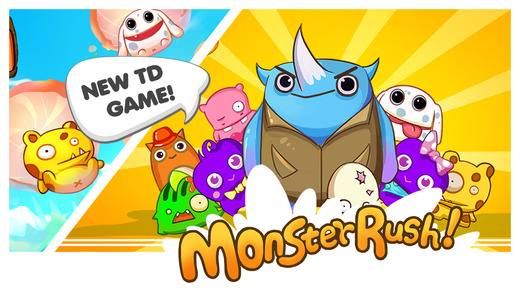 Monster Rush: Defender is a traditional tower defense title that features a bunch of earthy elements going up against strange enemy creatures. The game has a couple of twists on the traditional format along with a some strong IOS controls that make it a joy to play whenever in active combat. I cannot say enough good things about this title, but after the very early levels, the challenge begins to scale to the rest of the game very quickly. The arena will be hard to fight in and very difficult to actively play against in later levels of the game. Here are a few Monster Rush: Defender cheats, tips and tricks that will stretch your video games knowledge to the limit. Take a look at the following uses of how to get the most out of the game.

1. Choose which elements that you deploy wisely

In order to get the most out of Monster Rush you need to effectively pick which elements that you are using against which monsters. Waves of enemies are going to come further and further to fight against you. In order to consistently win the battles in which you face. There is also going to be less of a chance in getting into that some plethora of losing if your enemies stacked against you in the appropriate manner.

By choosing when to rally up waves of enemies and make the waves come faster and faster, it will work to your favor. Attacking some of the different enemies faster can lead to even more money and experience for the set level making your move set even more skill based and strategic. By being smarter about the work that you are putting into the game, the rewards can even come quicker at any given experience during tenure while playing the game.

3. Upgrade units instead of building new ones

4. Use the blocks on the leaf unit

By using the leaf blocks on the different selections of heroes, you can really chain together a strategy with some of your different heroes that can allow you to be even stronger and stronger as you go along while playing the game. By using different types of elements, waves, enemies, and leaf units the game can be a breeze. You can leap through different levels that you are embarking on faster and faster, leading to more levels, people, and worlds as you go along.

Through using potions, you can also increase the power of the different elements that you are using for the different element types that are on the board. This is another example of another thing that you can use in order to power up the rest of the beings that are at your disposal. This is another tool that you can use to your advantage during your time with the title. Being smart about the different tools at your disposal will allow you to chain some very devastating usage of strength. This game can get difficult, but if it does, take a look at how you are managing your tactics.

Tower defense games revolve around the concept of strategy. Using them in a way that will serve to benefit the individual over time will lead to them having a more effective mode of play as they continue to experience the game. Different ways to use some of the same skills can really change the several dynamics of any set maps. By taking advantage of the numerous skills and abilities given to you, this game can be played to the best of your ability. It’s tempting to just randomly put pieces to a board, but make sure that you combine the skills in a way that benefits you in the long term.

7. Check out videos and try out the flash game for practice

By experimenting with other people’s tips and strategies, you can massively take advantage of some of the other strategies that others on the internet have. Some of the uses of the online version of the game can help you try out some of the skills that you have learned here.

This game is completely skill based, so making good use of your time and being smart about the choice that you choose to decide on will help you play the game even stronger.