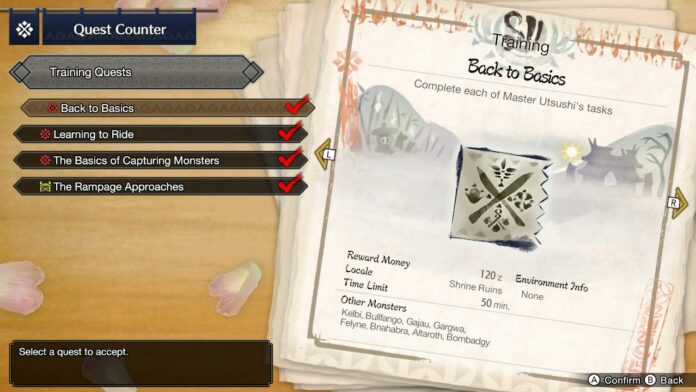 As you probably know, you should hunt monsters in Monster Hunter Rise. This is your main goal. However, quests also play important role in the game. In this guide, we will tell you everything you need to know about quests in the game.

Let’s start with a piece of banal advice, which for some reason not all players adhere to. If you want to effectively level up your character and become the baddest hunter in the world of Monster Hunter Rise, you will have to do side quests. They expand the capabilities of the character, for example, give you new skills for weapons, help you find original equipment, and open access to rare types of food. So don’t neglect side quests if you want to level up quickly and make your character a really effective hunter. By the way, if you don’t understand what to do in a particular task, then just read the journal, the quest goals are always written there.

You don’t have to waste time completing quests in the hub that have nothing to do with the main story. This is a waste of time because as you progress through the story, you can level up the rank of the character by completing just one special quest, which is many times faster than torturing yourself with boring hub tasks.

In addition, you will return to these quests in any case after you deal with Magnamalo according to the plot. And remember, hub quest monsters are many times stronger than those who need to be killed in the campaign.

We advise you to carefully go through each location as you progress through the quests. There are a lot of secrets in Monster Hunter Rise, ranging from fairly visible ones to hidden Easter eggs. Sometimes your attentiveness can give a very nice bonus.

You should also pay attention to the hidden notes, as they give a lot of Kamura points. At the same time, it is quite difficult to search for them, so we advise you to immediately use the guides on the Internet. Monster Hunter Rise has been out on Switch for a long time, and fans of the game have spent dozens of hours looking for all the hidden notes to make it easier for you. Take advantage of it!