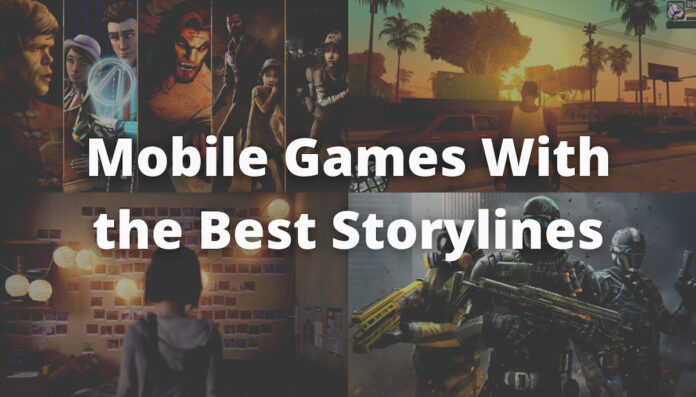 A lot of gamers will agree when we say that the most fascinating and captivating part of any game is the story. And that explains the amount of time and sweat that game developers put into forming a fine storyline that players will love.

While a lot of games with incredible stories are available on console and PC (some even exclusive to console), there are certain game developers that enjoy carrying the mobile platform along and porting some of their finest titles on Android and iOS devices.

So sit back and enjoy our list of the best mobile games with the most captivating, emotional and shocking storylines.

Brothers: A Tale of Two Sons

This is a game about two brothers who embark on a quest to find a special healing water that can save their dying father. On this quest they delve into the unknown with nothing but themselves. You’re not carrying weapons or guns, but you must control two brothers and strive to see that they make it back alive.

For the first time on mobile devices, Brothers: A Tale of Two Sons lets players take control of two protagonist at the same time with the intuitive joystick controls. The game delivers a unique adventure that’s coupled with an ending you won’t easily forget. You’ll face giants, witches, monsters and even face cultists in an attempt to save your father and make it back alive.

Despite being around since 2012, Six Guns remains one of the best mobile game till date. It’s an open world adventure game that lets you explore the wild west as a cowboy who embarks on a quest to uncover the truth behind the mysterious disappearance of his beloved wife only to discover a shocking truth.

Rather than driving cars and flying planes in this game, Six Guns lets you explore a rugged open-world on the blood red sands of Arizona and Oregon on different types of horses. On your quest to find your wife, you’ll be forced to travel the path of a wanted man who’s set on redemption as you become wholly immersed in the game’s captivating story and intense action with supernatural beings like vampires, werewolves, witches and dangerous outlaws.

Life is Strange is simply a masterpiece that mobile players will revisit over and over again due to its sheer brilliance. The game puts you in control of Max Caulfield, a teenage girl who discovers that she has the ability to rewind time and alter the past, present and future events that happen around her. Now she is forced to use her powers to help the people around her don’t help them at all as there could be consequences.

The developers aimed to revolutionize story-based choice and consequence games with Life is Strange and they were successful as every choice you make will impact how the story will end. Life is Strange delivers a captivating story with a shocking twist that will blow you away in the end. And players will be left to make the decision of a lifetime at the last chapter of the game.

Some of best stories from video games come from Rockstar, creators of the acclaimed Grand Theft Auto games. Despite being around for a long time, games like GTA San Andreas, GTA Liberty City and GTA Vice City are often considered when discussing the best mobile games with captivating storylines and we agree.

GTA San Andreas made its way to mobile in 2013 where it didn’t take long to become the best open world game on the platform for years. GTA stories aren’t great simply because of the drama and action, but also because of the duration they come with. The stories are longer than that of most mobile titles and they’ll keep you hooked till the end.

Absolutely incredible! Not just one of the best mobile game with an incredible storyline but also one of the most distinct mobile games out there. Stranger’s Wrath is an intriguing game that’s filled with wondrous adventures. You’ll play as a bounty Hunter who’s trying to save enough money to pay for surgery.

But when things go south, the hunter becomes the hunted in this wild adventure game. You must roam the open world and try capture wanted criminals and also avoid being killed as well. The game sees you face up to unique bosses, incredible story and hilarious set of creatures in the odd world.

While many mobile gamers may not have heard of this one, Leo’s Fortune is actually one of the best platformer adventure games out there. The protagonist is named Leo, and you must help him recover his lost fortune by playing through interesting levels that look stunning with great visuals.

You’ll also encounter enemies and lots of riddles that you must pass in order to progress and make it to the next level. As you progress, you’ll experience new story cutscenes that introduces you to some of Leo’s family who might have a role to play in the disappearance of his fortune.

This remains one of the best games with a superb storyline on mobile. It was originally a PC game that was ported to mobile in 2016. The game sees you roam around in ancient China as you must learn the secret arts of Kung Fu and save your nation from a deadly foe.

The game is semi-open world which means your movement is limited to certain areas. Rest assured it offers a lot of features that you can enjoy from the average open world game. The storyline is long and it provides players a brilliant twist that you won’t see coming.

Gameloft Games were known at one point as the best mobile game developers. However, that title has since been revoked as the company has recently degraded in terms of releasing new titles for the platform. Some of the best games we can’t forget are the Modern Combat games that introduced many to the first-person-shooter genre.

From the very first Modern Combat game to Modern Combat 5, their storylines are worth experiencing. You’ll either play as a soldier or play as a terrorist who wants the entire world to see things form his point of view by kidnapping the president. Each Modern Combat game offers an intense and thrilling story that you wouldn’t want to come to an end.

The news of Telltale Games shutting down came as a shock to many several years ago but now it’s back and this time they’ve partnered with Deck Nine Games to bring new exciting titles to players on various platforms. Telltale owned the rights to some amazing games like Guardians of the Galaxy, The Walking Dead and Game of Thrones. But they sold the rifhts to these games that are still available under new ownership.

However, some remarkable Telltale titles are The Wolf Among Us and Batman. And the company is set to return with new titles in the coming years as it is currently working on The Expanse: A Telltale Series and The Wolf Among Us 2 as well. We knew of a Stranger Things Telltale Series that never saw the light of day as it was cancelled in 2018 due to large amount of layoffs by the company.

Some other mobile games with amazing storylines worth mentioning are Fahrenheit: Indigo Prophecy, Genshin Impact, Gris, and Deus Ex: The Fall. If there’s a game you’ve played with an incredible storyline, kindly let us know in the comments.

Mobile Games with the Best Storylines