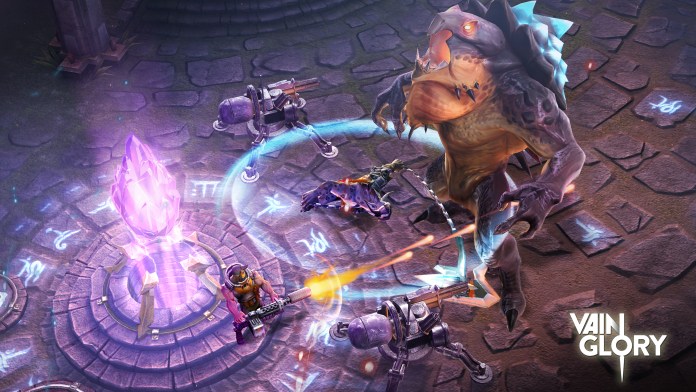 The update introduces a new character to the game, a little dragon called Skaarf. Being a dragon, Skaarf is a good long range character, working quite well in a team.

The new character isn’t the only addition of the latest Vainglory update, as it also includes several new features like Party Queue chat and private matches, among other additions.

Here are all the details of the new update:

Skaarf is a little flamethrower who thrives at dealing long-range and area-of-effect damage, especially during teamfights. Read his tactical breakdown in the in-game News section.

SPITFIRE
Skaarf spits a fireball that deals crystal damage to the first enemy or creature in its path.

GOOP
Skaarf hurls goop onto the target location. Enemies walking through the sticky substance are slowed. Skaarf’s fire abilities will set the goop ablaze with a burst of damage that extends slightly beyond the gooped area. Once aflame, a gooped location will not slow but will apply damage over time.

DRAGON BREATH
Skaarf inhales deeply, slowing fleeing enemies and accelerating closing allies. Skaarf then exhales flame, incinerating enemies in a cone in front of him. While exhaling, enemies moving against the flame are slowed while allies moving with the flame are accelerated. Skaarf may move freely while spewing fire, but he cannot basic attack or use other abilities.

– Invite up to 6 players into a party and initiate private matches. You may choose any number of players up to 6, including 1v1 duels or 1v3 lopsided battles for ultimate bragging rights!
Chat: Stage 1

– This update includes Party Queue chat. To ensure chat runs smoothly, we will be turning it on slowly region-by-region post-update.
Vain Crystal Explosions!

– Mark your victory (or defeat) with an epic Vain shatter.
‘Dodging’ Cooldown

– Players who cancel a match by choosing to not lock in a hero will receive the same cooldown penalty as declining matches.
Latest Hero & Item Balance Changes
– Check the in-game News section for a detailed breakdown.

Vainglory is now available for free on the App Store.