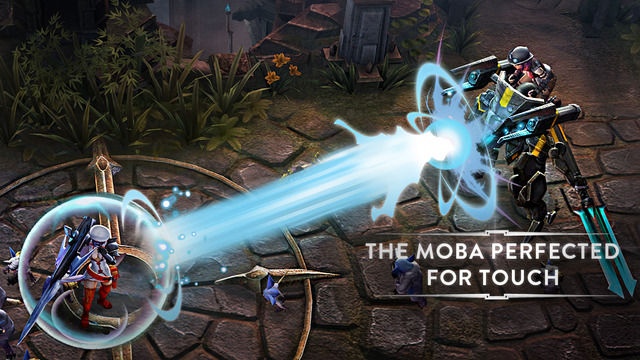 Vainglory, the MOBA developed by Super Evil Megacorp now available on the App Store, has recently received a new update which introduces plenty of new content to the game.

The new update introduces a brand new heroine called Skye to the game as well as four new skins, tweaks to the Karma System and much more.

Here are the full patch notes for the 1.8

NEW HERO: SKYE!
Skye is a swift sniper able to dance at the edge of fights or dive deep into the enemy backline to kill key targets. Skye’s unique strafing attacks change the complexion of fights, and her ability to chase down and catch opponents is unparalleled. Start Skye in the lane, mow down minions and build weapon or crystal depending on your playstyle.

Target Lock (Heroic Perk)
Skye locks onto and reveals the target she most recently basic attacked. Basic attacks and Forward Barrage on that locked target grant her bonus move speed. This speed bonus is dramatically reduced while moving backward. Target Lock is lost if the target moves too far away from Skye or if she doesn’t attack her target for too long.

Forward Barrage (A)
Skye fires her guns while strafing. (She can move freely but cannot change her facing direction.) Reactivating this ability will cancel it. Forward Barrage deals damage to her locked target (but less damage to non-heroes). The duration increases with Skye’s crystal power up to a max.

Suri Strike (B)
Passive: Each ability point in Suri Strike increases the amount of time Skye can keep her target locked without attacking it.
Active: Skye dashes to a chosen location near her locked target. While dashing, she fires a volley of missiles that lead her target. This ability can only be activated when Skye has a locked target.

Death from Above (Ultimate)
Passive: Each ability point in Death from Above increases Skye’s target-lock range.
Active: Skye fires a salvo of missiles at a chosen location near her locked target. After a brief delay, the missiles rain down on that location, stunning enemies. Enemies still in the area afterward are slowed and take crystal damage. Aiming directly on your locked target rains down the missiles in a cluster. Aiming away from your locked target rains them down in a line across the target’s path. This ability can only be activated when Skye has a locked target.

KARMA SYSTEM REVAMP
– Karma system has been dramatically simplified.
– Karma levels replaced with three player states: Great Karma, Good Karma and Bad Karma.
– Karma state determined by RECENT and current player behavior, along with thumbs up & down.
– Players with Bad Karma will be banned from playing matches and chatting for a set period of time.

PROFILE TROPHY ROOM
– Starting with 1.8, Vainglory will remember your highest Ranked skill tier earned and display it in your Trophy Room.
– Update 1.8 will be considered the preseason (Season 0).
– The preseason will end with the release of 1.9, and you’ll earn a permanent trophy based on your highest rank.
– Earn different trophies each season.

Vainglory is now available on the App Store in all regions