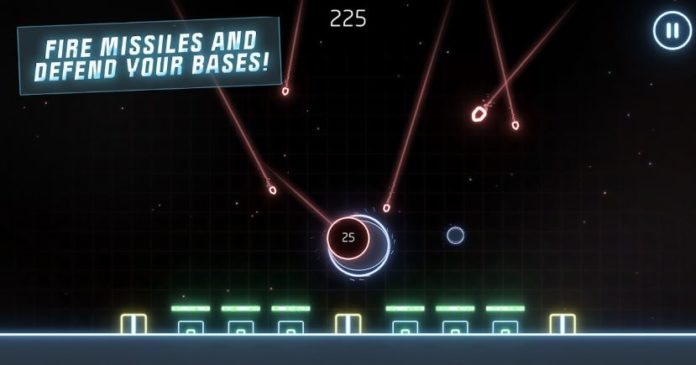 Atari’s arcade classic Missile Command is back, and it is better than ever! Missile Command: Recharged is a sleek, new re-imagining of the original game. Tap to launch missiles to defend your base against the oncoming rocket barrage. With new power ups, upgrades, and enemies, Missile Command has never been this intense!

As the first few seconds of the game explains, your missiles take some time to reach their destination. At default power, you will need to lead your missiles a few spaces in front of the enemy rockets heading for your base. The rockets should collide with the lingering explosions from the missiles.

This may seem tricky at first, but keep at it and you will be launching missiles like no tomorrow. All you have to do is lead your missile launches in the general vicinity of the rocket, and you should be fine. You will get the hang of it quickly!

The problem is is when the game starts throwing multiple rockets at you at once. It is very easy to lose your cool and start panicking when you see a ton of rockets heading for you all at once, but remember to never panic!

Watch for the rocket that is the closest to your bases and try to aim for that one first. You need to eliminate the closest threat to your bases to ensure that you do not lose any! Even if you see a bunch of rockets raining down, steel your nerves and concentrate on taking them out one by one!

Remember that your cannons must reload after they fire, and if you try to fire again your closest loaded cannon will fire. Keep this in mind if you are trying to shoot down close rockets, as the cannon that fires may be on the other side of your base, and you need to compensate for that extended travel time!

In addition to regular rockets that head straight for your bases and cannons, you will also encounter drop ships. These bulky ships will fly in from the sides of the screen, and instead of shooting rockets at you, they will simply fly over and drop them in a straight line.

Their predictability makes them easy to hit, so if you can launch a missile at one of the drop ships as soon as it shows up, it will take the ship out along with the rockets inside, so you can knock out both targets at once. It is worth a lot of points!

Even if you cannot destroy them in time before they release the rockets, do not worry about it – often times they will drop the rockets in empty spaces so you do not have to worry about your bases getting hit.

Every now and then, a floating diamond will appear from the side of the screen. This is a power up, and destroying it will bestow upon you temporary boosts in power. The letter that is inside the power up will determine what kind you get.

The (F)ast power up drastically speeds up your missiles. Your missiles will reach their target destination in the blink of an eye, so destroying rockets is as simple as tapping on them as you see them!

The (S)hield power up will add a temporary green shield above your bases. These shields will protect your bases from a single rocket. Keep in mind that your cannons DO NOT get shields, so make sure to protect those at all costs!

The (B)omb power up will immediately clear the entire screen of projectiles and enemy ships. If you are getting overwhelmed this power up can save you in a pinch, so be sure to shoot it as soon as you see it!

The (T)ime power up will slow down all rockets and enemy ships currently on the screen. They will come down to a complete crawl, buying you some time to pick them off or save yourself from a bad situation.

The (M)ega power up will overload your cannons, making them insanely strong! Your missile explosions will be at maximum power, turning them into weapons of mass destruction!

If you are looking for a specific power up, do not worry if you do not see the letter you want yet. If a power up is left alone for a few seconds, it will cycle to another random power up type, so you can always wait to get what you want. Just be careful of waiting too long and ignoring the enemy rockets!

You may have noticed that rockets will pop with their own explosion. If another rocket flies into an enemy explosion caused by your own missiles, then you will get a multiplier bonus. For example, small rockets are normally worth 25 points, but if one gets destroyed by another rocket explosion, it will be worth 50 points.

This is hard to do during the early stages of the game when there are not enough rockets spawning in, but you will find yourself blowing up multiple rockets with one missile later on when things get really crazy.

The best thing to do is to check the trajectories of all the missiles currently on the screen. If it looks like they are going to intersect, wait for them to travel a bit then blow them all up with one missile to cause a chain reaction.

It is good to go for as many points as you can, but remember that at the end of the day, survival is the name of the game! If one of your cannons get destroyed, do not give up – your cannons will regenerate over time, and if you can survive long enough, you will have another operational cannon.

However, if a base gets destroyed, it is NOT coming back, so you must protect them at all costs. If it comes down to it, you can sacrifice a cannon for a base if you need to shoot a clutch missile. Because of this, your game will automatically end if you lose all bases, even if you still have cannons up and running.

After you lose all of your bases, the game will end and your points are tallied up. You can spend these points on upgrading various aspects of your cannons.

Power determines your canonns’ explosion radii. The higher the power, the bigger the explosions will be, making it easier to start chain reactions and destroy multiple rockets with one missile.

Reload determines how fast your cannons can fire again after launching a missile. A high reload rate can save you from some speedy missiles.

Speed determines how fast your missiles travel. The more speed your missiles have, the faster they fly through the air. With enough speed you should be able to hit any rockets!

Rebuild determines how fast it take for your cannon to regenerate after they are destroyed.

To upgrade to level 1 it costs 1,000 points. Level 2 costs 5,000 points, and level 3 costs 10,000 points, and it just keeps getting more expensive. Choose your upgrades wisely, as they get very pricey later on!

That’s all for Missile Command: Recharged! If you have any other tips or tricks to share, let us know in the comments below!