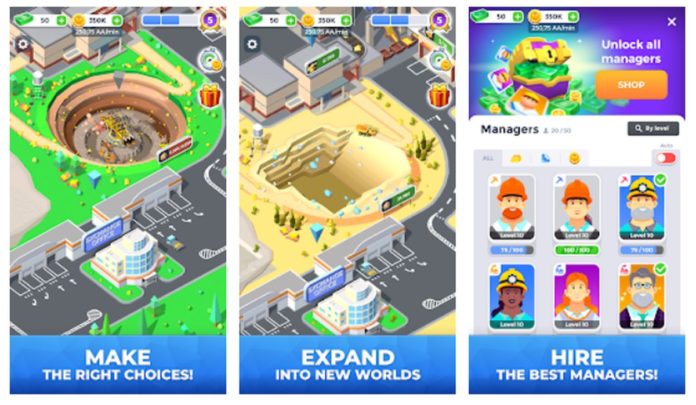 Mining Inc is a charming & relaxing idle game that puts you in charge of building a true mining empire. And we’re here to help you get better at the game by sharing a bunch of Mining Inc tips and cheats in our complete guide.

With things getting more and more complicated as you go up the ranks, you want to make sure that you buy the upgrades in the right order, do everything possible to recruit more managers and optimize your resource production as well as possible.

And this is exactly what we’re talking about in today’s guide, so read on for some Mining Inc tips and tricks!

Always know the requirements for next rank

Your main goal in Mining Inc is that of unlocking a new rank which is somewhat the equivalent of Prestiging in similar games.

But unlike other games where you just need to play and accumulate resources, here you will have to complete a bunch of requirements before you’re allowed to rank up.

Make sure to check those out and know the requirements at all times, making it your main goal to get them ASAP.

Not only that completing each goal will take you closer to the next rank, but you will always receive some nice rewards that will help you progress faster.

Focus on the important upgrades first

Some upgrades are more important than others and you need to micromanage everything with great care to make sure that everything is running smoothly.

Mining Inc is a type of game where you have to upgrade everything evenly for things to function properly, but you still have to focus on some aspects of the game more than on others.

Buy the most important upgrades first because these will help you progress faster. No need to upgrade the lorry to carry more if you’re not producing enough!

Also, one of the most important upgrades that you should buy is that of the various things in the Exchange Office: the Coin trading, for example, is by far the most useful as it increases the amount of money you receive for each item sold.

Tier up the resource mining buildings

You will soon see that the mining capacity won’t be able to keep up with the transport capacity and production. This is when Tiering up buildings comes into play: when you tier up a building, it will give you more things to upgrade.

Based on our gameplay experience, you should focus on tiering up the resource mining buildings first in order to keep delivering the required amount of ores. So the first building you should always tier up is the Gold mine, followed by the Underground mine and then the Diamond Mine.

Of course, you shouldn’t completely ignore the others, but these are the first to tier up and in the order listed above.

Unlock new managers and upgrade them

Up to three managers can be assigned to a building in order to boost its production or help one way or another. They are difficult to get, but you should still optimize for unlocking them.

The main thing you can do is get back every 8 hours to unlock your free chests: these won’t hold massive quality managers, but every little bit helps, since even the common ones can be upgraded and turned into useful ones.

Also, make sure that you tap them and assign the best of the best to your factories when you have more than three options available: depending on what you need, a high level common one can be better than an Epic.

Tap the trucks to speed them up

If you’re actively playing the game, you know that there’s not a lot you can do except for listening to the relaxing soundtrack and looking at everything on the screen.

But there is actually something you can do to be more productive: you can tap the trucks to speed them up!

You won’t give them a massive boost this way and it won’t last long, but it will help you a little bit and make you more money which is exactly what you might need every now and then.

Keep an eye out for the chopper

Another important helping hand comes from the chopper: it will land every now and then next to your base, usually offering you some coins.

Sometimes, you will receive these coins by simply tapping the chopper, but other times you will have to watch an ad to get a larger boost (it’s your choice to decide if you want to watch the ad or not).

Extremely helpful, especially if you’re short on cash: so make sure you don’t allow a single chopper to escape!

As you go up the ranks in Mining Inc, you will unlock new mines that will offer new ways of making money.

They will work differently (some will use already existing technology, while others will require a completely new setup), but one thing is clear: always, these new mines will make more money.

So it’s a good idea to start upgrading them as soon as you have them, making them your main focus of attention. Don’t completely ignore the others – every little bit of extra money helps – but do focus on the new mines!

Micromanaging your upgrades is a difficult task when you’re dealing with so many things that you can upgrade and so many things to take into consideration. But there is one thing that helps you understand if you’re really upgrading the things you should!

And that information is the amount of money you’re making per second. It took me a while to realize that, but once I did, everything became a lot easier.

Simply keep an eye on it and see if a new upgrade you buy increases that value or not. If it does, it’s a good sign: it means that it was indeed that particular thing that had to be upgraded for you to move forward.

If it doesn’t, it means that, at least for a while, you shouldn’t invest in upgrading that area of the game because you’re not getting any benefits.

For example (but there are way more situations in-game), upgrading the size of your lorry would normally increase the amount of money you make simply because it means that it can carry a larger capacity to the Exchange Office.

But if you only produce 100 gold and you increase your lorry capacities to 200, you will just have empty vehicles roaming around, as there is nothing that they can carry and therefore no extra money to be made.

Sure, the lorry thing is easy to calculate because you can see how much you have in the warehouse and what is the general capacity of your vehicles, but in other cases (upgrades to the gold refinery, diamond mine and so on), things are not as obvious.

And this is when you should keep an eye on your money made per minute – that should increase with each upgrade you buy.

There are a few exceptions here – all upgrades with a % chance for something to happen won’t increase the amount of money the game shows you make per minute.

It’s really nice that Mining Inc won’t bombard you with ads, and all those that you can choose to watch will actually prove to be extremely useful.

Probably the most useful ad you can watch is the one that triples your offline income, especially if you’re returning to the game after a few hours away. Watch it and grab those money that can help you progress faster toward the next rank!

These would be our tips and tricks for Mining Inc. If you have additional strategies for this charming mobile game, don’t hesitate to let us know by commenting below.