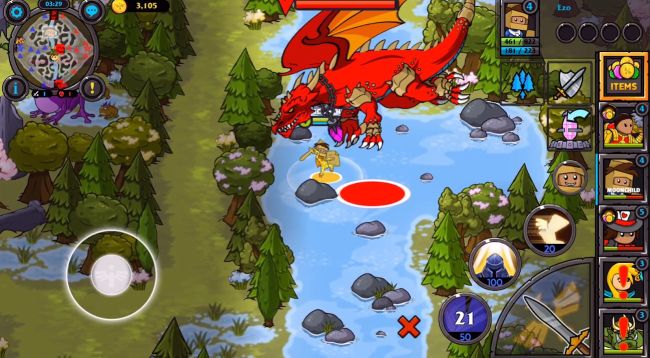 In today’s article we are going to take a look at all of the Mini Legends tips and cheats that we’ve gathered and share them with you so that you can learn how this game works and win more battles.

First of all, this is a MOBA so if you know the kind, then you know that you’ve gotta rely on your own mechanics and map knowledge, as well as gathering Gold ASAP to outpower your opponent! Secondly, if you know how MOBAs work, well you gotta forget all about maining one role and focus on all of them together!

Sounds like a challenge? Well, it is – and it is not! All of that because you will have to focus on all 5 characters at once, all while your opponent has to do the same. So it is pretty much a double-edged sword. But that’s what makes this game unique.

So without further ado, let’s not waste another second and dive right into the Mini Legends tips and tricks to help you win more games and become better at the game!

Play the Saga mode to level up and train

There are two main game modes which you can play in Mini Legends: Multiplayer mode or Saga mode. The Multiplayer mode is basically the PvP mode which lets you queue up against another player and try your strategy in real time versus another human being (non-AI supposedly).

The Saga mode is the mode where you go versus AI bots and you can practice various team compositions, item builds and such. I suggest that you try playing the Saga mode as much as you can until you learn and level up a little bit (by a little bit I mean a lot actually) because when you do that, you will unlock skill points which you can use to distribute to certain heroes.

It is not super difficult leveling up, but since the games are versus bots, you should be able to do them in a few minutes, if you focus on a single champion. For instance if you focus on the mid laner, then you can just try actively playing that one or switching between characters.

Whenever you acquired a new character you should first play it in the Saga mode because that way you can tell if it’s good or not, and you can see what items it needs the most and in which order. So by all means, don’t skip it! Play as much as possible!

Spectate others and learn from their games

The game has this pretty fun and useful function which lets you spectate other active games. This is a very useful tool because if you are new and still want to learn some strategies the spectate function will let you do that.

This option is available in the top right corner of the screen, and it will show you all the active PvP games that are going on at the moment. The PvE ones are not shown, so it’s really only the PvP matches which feature a player versus another.

Since these are ranked games, you can also tell their ranks which is the numbers that appear on the screen below the player’s name. Usually these games are pretty equally ranked, with a max difference of about 100~ from what I have noticed, so it will not put a very experienced player against a totally newbie.

I would suggest that you watch the games which have some of the highest ranked players, because these are the “best” ones supposedly (however we’re all humans, so we all make mistakes from time to time – don’t be too hard on them if you see any).

There will be quite a few buildings around the town, which are still locked for now. These buildings can train your heroes, increasing their basic stats by some points / attributes, so try to unlock as many as you can for now as soon as you obtain more Keys.

How to get more Keys?

Getting more Keys is pretty simple – all that you have to do is play the Saga mode, and eventually you will receive enough Keys to unlock all of the buildings in the town. You can start with any one of them, but if you are looking for a specific trait upgrade (let’s say you want STR or Constitution upgrade) then try to get one of the buildings that train that field.

For example the Sorcerers Circle will train Casters, the Gym trains Constitution and Strength, in the Dojo you can train Rogues, in the Mage Tower you train Mages, and the Blacksmith will train the Tanks. Eventually you’ll have to unlock all of them, so don’t struggle picking the right one first, as all of them are equally useful.

You can customize your heroes

If you have some extra Gems that you don’t know how to spend, then you can always consider unlocking some skins for your heroes! These customizations can be unlocked by either purchasing them with Gems, or by unlocking them through premium methods or season rewards.

You can check out the skins for your currently owned heroes if you head on to the Market, then Customize, then select the hero you want to check out and you can see there a list of all the currently available (and non-available) skins.

I would suggest that you don’t rush picking the first skins for the heroes with 100 Gems, because you might receive some from the Season rewards! Check out the season rewards first and then, if there are no pretty skins that you like or for the heroes that you want, then and only then you should buy them!

Check out the Season rewards

There are certain Season rewards that you can receive, and depending on how much you have advanced that particular season, you can get skins, emotes and other fun customizations for your heroes! You can check out the Season rewards when you head on to the Market -> Seasons.

In that menu it will show you in the upper left side how many days are left of the current season, time which you should use to obtain as many rewards as you can and rank up as much as possible.

These cost more than the rest, but they already have quite a few good / not so good stats increased. For example there might be heroes which have almost maxed certain stats, so if they have the stats that you want, then you should save up Coins and try to buy them.

I suggest that you don’t waste your Coins on un-trained heroes (which can all be found below the three trained heroes), because they will take a lot of time to train and if you want a strong team, you should consider investing in the trained ones.

In my opinion you should scout the shop here for a while and in the meantime try to save up 10,000 Coins because that way you might be able to straight up purchase an already trained powerful hero which will carry you through the battles faster than a hero with 0 training.

Also don’t forget that the key here is to look for the right stats in the right heroes! There might be a hero with maxed out INT, but if that hero doesn’t need INT that much, then it’s going to be a waste of Coins. So don’t forget to check out the stats and see if they are the right ones!

Itemize all your heroes during battle

It will take a while, but luckily there is an AI which will take over for you over the other 4 characters while you are focusing on a single one. That is fun and at the same time makes you want to come up with the best strategy against the opponent, who has to also focus on one character at a time!

That’s exactly why you should never forget to buy items for all of your heroes! You can first get on your strongest hero, then slowly build up gold and get on the other ones as well. Potions are not mandatory, but they are going to be useful by keeping you in lane farming for longer!

These would be all of our Mini Legends tips and tricks that we have for you right now! Do you know some more useful game tips and strategies to win the games? Feel free to share them with us and the other players down in the comments section below!