Home Game Guides Minecraft: How to Fix “Server was shut down due to unhandled scripting... 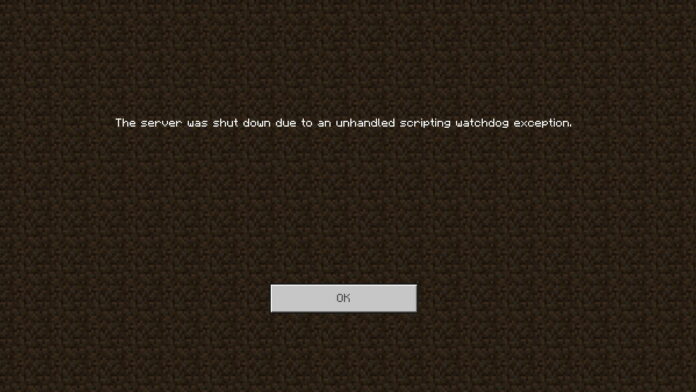 Minecraft, throughout the years, has become more and more robust as a program. Despite this, the game still sees some errors occasionally, and troubleshooting them can be a pain, depending on the error in question. With the release of version 1.19.20, a few new problems have been introduced to the game. Today, we’ll show you how to fix “server was shut down due to unhandled scripting watchdog exception” error in Minecraft!

As with any Minecraft error, it’s best to first understand why the error occurred before attempting to troubleshoot it, so that you can potentially avoid the problem in the future. For starters, this issue seems to have popped up substantially following the release of version 1.19.20.

With some research, we found out that this error was mostly occurring on the Bedrock Edition, though there were a few cases reported on the Java Edition.

Minecraft version 1.19.20 released last month, and if you read the official blog post about it, you’ll notice that they modified some system events for servers. Specifically, this line:

The server watchdog basically ensures that the server is running at the proper TPS (Ticks per second), and if anything is interfering with that, it’ll throw out errors.

New to version 1.19.20 is this new system command that shuts the whole server down if it detects watchdog errors. By default, it’s set to true, so if a watchdog exception is detected, the server will shut down, and you’ll get the error.

It’s difficult to pinpoint exactly why all these new watchdog errors are popping up now, but in a lot of the reported cases we found, people had add-ons and mods enabled. If you’re experiencing this issue, the first step you should try is to disable all mods and add-ons, then test the game.

We’re inclined to believe that this might actually be the problem, as many mods were not optimized for the new 1.19.20 update. As such, since there is now a failsafe implemented into the server backend, these mods would eventually crash the server with the failsafe turned on.

If you’re sure that your mod isn’t causing any problems, you can open your server’s configuration file and edit the command listed above. Simply change it from “true” to “false,” and the watchdog will not shut down the server when it detects an error.

Additionally, there have been reports of players playing in single-player worlds experiencing the error, which definitely should not be happening. If this is happening, we recommend reporting the error on the official Mojang Issue Tracker, and disabling any add-ons or mods.

That concludes our Minecraft guide on how to fix “server was shut down due to unhandled scripting watchdog exception” error. Due to the nature of this error, it may require action on Mojang’s part. If you have any other questions, please let us know in the comments below.

Minecraft: How to Fix “Server was shut down due to unhandled scripting watchdog exception” Error