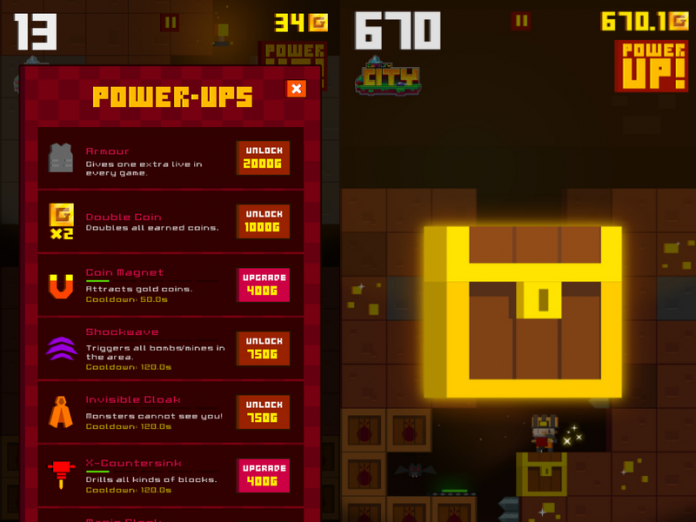 A vast mine full of treasure, mystery and danger awaits you in Mine Blitz! Mine Blitz is a endless digger. Seriously! You’ll be digging down uncovering as much treasure as you can. Beware of the traps and monsters out to get you though! You’ll need your wits about you as you descend the mine. Purchase a variety of power ups with the treasure you’ve earned and descend further and further! Blitz like no miner before with our Mine Blitz cheats, tips and tricks strategy guide!

The most important thing to keep in mind when playing Mine Blitz is to be patient and take your time! Rushing in is the fastest way to guarantee an untimely end. There is no need to rush. The screen slowly descends and if you’re caught between an obstacle and the top of the screen, it’s over. However, the screen descends so slow it might as well not even move at all. Don’t let the moving screen fool you; you have plenty of time to react to any kind of obstacle, trap, or monster. Just don’t panic and rush into danger blindly!

2. Get the coin upgrade!

Coins you dig up are worth only one when you start the game. Buying the double coin upgrade in the shop will make each coin worth – you guessed it – two! Before anything, you should try to buy the coin upgrade first. This will make it much faster to get the other upgrades in the long run. In fact, the other upgrades are pretty useful but a lot of them are incredibly situational.

3. Use your power ups often!

Power ups become available once you’ve bought their first stages in the shop. Power ups run on cooldowns, but the cooldowns are automatically at the beginning of each level. Don’t be afraid to use them – they could mean the difference between life and death! This also goes double for the coin magnet power up. Use it whenever you see a group of coins trapped behind a bunch of indestructible blocks.

Your miner is subject to gravity, even though the blocks in the game aren’t. If there are no platforms below your miners, he’ll fall down until he lands on one. Beware! If you see a horizontal spiked pillar moving around, make sure to stop one row before the last row of blocks. If you go too far down you’ll fall right into the pillar.

5. Watch for the horizontal brown blocks!

There are brown blocks that must be collided with twice before they break. When they’re below you it’s no problem, you just have to dig twice quickly. If they’re horizontal though, beware! Your miner has to run back and forth through the row to hit the block twice. Be sure to compensate for any hazards or monsters that could get in the way!

6. Use your advertisement checkpoints wisely!

After each level, you can set a checkpoint to restart there if you die. To do so you can either watch a 30 second advertisement or pay 40 coins. We prefer to watch an advertisement, but beware as you can only do it a certain amount of times within a period of time, surprisingly. The same goes for finding chests and doubling them. What we recommend to do is to play through a couple of levels and if you end up dying on one and think you’re going to have some trouble, don’t hesitate to set a checkpoint down.

That’s all for Mine Blitz. If you have any other tips or tricks to share, let us know in the comments below!