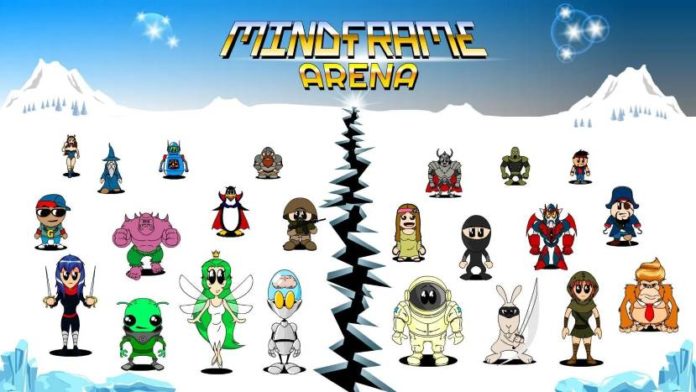 The Mindframe requires a new champion. Will it be you? Mindframe Arena is a strategy board game fun for players of all ages! Choose five “tecs,” special beings with powerful spell casting abilities, and duke it out with the AI or another player in a battle to see who can conquer each other’s base first!

Spell-focused tecs with low power bars should hang back so that they are safe from challenges, whereas strong power tecs should lead the charge and take on enemies head on with their impressive power bars.

And of course, be sure to cover entrances to your base. Remember that all it takes is one tec to make it into your base, and you will automatically lose the match!

Work your way up the tree of tecs!

Rebels are the most common kind of tec, and you will start the game out with a majority of them already unlock. Rebels do not have any obvious strengths of weaknesses, so that makes them good all-around tecs. Some of them have helpful spells and some have decent power bars, making them very versatile.

Warriors are powerful tecs with higher than average power bars and strong spells that can turn the tides of battle. Most of them have move distance of 1 however, meaning that they will take a long time to get to where they need to, so you need to plan for that.

Militants are the most powerful techs with the strongest power bars and even deadlier spells. Much like the Warriors, they have low move distance but make up for it with the highest base power bars of all units and the best probability of landing full hits. A single Militant is capable of taking down an entire team!

Mystics are tecs that focus on strong spells. They have access to spells that can knock enemy tecs around, increase the move distance of allied tecs, and so on. They are also sporting high power bars with high probabilities, so they are good to use in challenges as well.

Bionics are android and robot tecs. They have very strong power bars and can completely disable enemy tecs with their debilitating spells.

Finally, we have come to Primes, the best of the best. There are only four on them and they have EXTREMELY high power bars, around the 2000-3000 range, and the chances are not that bad either. Two of them also have debuffs that affect the entire enemy team!

As you can see, the further you go up the tec tree, the better the tecs get. And they are not just tecs that specialize in a certain aspect – no, these tecs are just straight up upgrades than the older tecs. You need coins to unlock new tecs, and you get them by simply playing through the game.

Green spells can support your team!

Tecs with access to green spells are able to buff and support their team. For example, one of your starting tecs Buni has the Shield of Swords spell, which lowers the miss probability of a friendly tec to 30%. This is very helpful for tecs with a high miss probability.

Side note: you should know that in general, most buffs and debuffs – whether they are red or green – will only last until the player’s next turn, so you need to casts these spells when you are going to make your move to make it count.

One of the most important green spells to have is the spell that rescues one of your tecs from lockup. The tec you start out with, Healer, has this as her ability, and it has a 5 turn cooldown so make sure you keep her safe while it is cooling down.

You should ALWAYS have at least one tec with the ability to rescue your tecs from lockup. Because this game is mostly based on random chance when it comes to the challenges, a streak of bad luck can end up with half your team locked up.

Red spells can weaken your enemies!

On the flipside, red spells focus on debuffing your opponents giving you the edge in and out of combat. Challenge offensive spells like LittleLord’s Steel Fist can lower an opponent’s chance of getting a full or mid hit, making them more likely to lose in a challenge.

If you are having trouble with a particularly powerful opponent, hit ’em with one of these spells to lower their chances of landing a hit on you. There are also spells that increase a tec’s chance of missing too, which is a great option especially if your opponent already has a high chance to miss.

Other red spells can negatively affect enemy tecs outside of battle. Some spells can reduce their move distance, or move them around randomly to disorientate them. These spells can disrupt a plan or give you some breathing room, so do not underestimate them! There is even an offensive spell that decreases the amount of time you have to make your turn!

Level up to gain lots of gold!

You are always guaranteed 10 gold whenever you win a match, and we know that is not a lot. Do not fear though, because whenever you finish a match you will gain experience. When you gain enough experience, you level up, and each level up you get awards you with bonus gold.

For example, when we hit level 4 we were awarded with 1,000 bonus gold. Considering that some of the Prime-level tecs cost around 3,000 gold, you should be able to pick up your first Prime tec fairly quickly. Keep playing and soon enough you will be super powerful!

Here are some powerful tecs!

Banshee (Mystic): Has a full power bar of 800, mid 750, but most importantly her spell Hex lets her rescue a locked up tec. It only has a cooldown of 4 turns, whereas the other rescue spells have a 5-turn cooldown.

Soldier (Militant): Has a full power bar of 850, mid 700, and a low chance to miss. His spell Swipe Left has a 3-turn cooldown, and it renders him immune to spells until your next turn. He can storm an enemy base all by himself with careful use of this spell.

BlueBot (Bionic): 1,800 full power, 1,400 mid. The spell Meta Move allows BlueBot to swap places with any enemy tec. A well timed Meta Move can put you right in front of the enemy’s base!

Here are some sample standout tecs we have found across our journey. There are plenty of powerful tecs, so experiment and try out your own team!

That’s all for Mindframe Arena! If you have any other tips or tricks to share, let us know in the comments below!