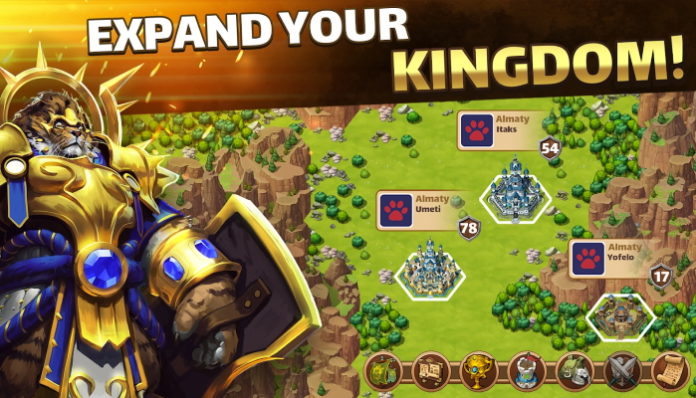 Welcome to Million Lords, a new style of MMO strategy games that abandons the typical mobile game format. It is just you, your army, and enemies – who will come out on top?

Million Lords deals away with wait times and convoluted upgrade systems; Million Lords gets straight into the action right away. Build up your army and improve your skills with the aid of our Million Lords tips and tricks guide.

Million Lords is for strategy game purists, and we are here to help you! Let’s get started with our Million Lords cheats, tips and tricks strategy guide to fight effectively!

Spend your skill points to match your playstyle!

Every time you level up, you gain skill points that you can use to add passive buffs to your character. There are four main skills, each with two additional auxiliary skills to compliment the base skills.

The first is the Striker skill. Every point into adds a 2% combat bonus when you are attacking other camps. If you are constantly playing and attacking other camps, this is the skill for you! You can take camps with relative ease, so take this if you like to be aggressive.

The second skill is Recruiter. Every point into this skill makes your camps produce 2% more soldiers. This skill is useful in any regard, so it is wise to invest some points into it.

The third skill is Prosperous. Every point into this adds 2% more gold generation, enabling you to upgrade your camps much faster. The higher level your camps are, the harder it is to take them down!

The fourth skill is Guardian. This adds a 2% combat bonus when you are defending against attackers. If you are away from the game a lot and want to make sure you can hold your own, this is a very important skill to have.

Auxiliary skills are important as well!

The first aux skill is Fearless, which is a combo of Striker and Recruiter. This skill gives you bonus survival based on the level of the city you are attacking. The higher the camp is, the better your survival bonus. The exact formula is +2% survival when attacking basic level: 25% (max 75%).

The second aux skill is Rusher, which requires Recruiter to be at level 10. This basically makes your army move faster, which is not terribly useful.

The third aux skill is Scavenger, which is a combo of Striker and Prosperous. This increases the amount of gold you get whenever you take down an enemy army.

The four aux skill is Cautious, which requires Prosperous level 10. This skill refunds a portion of the gold you spend on a city when you lose it, up to a max of 50% of gold. This skill makes recovery from a big takeover a little easier.

The fifth aux skill is Salvager, which is a combo of Prosperous and Guardian. You get more gold whenever you take down an army while you are defending. It is basically the defensive version of Scavenger.

The sixth aux skill is Brave, which is a combo of Guardian and Recruiter. You gain a bonus to survival when you are defending, with the bonus being higher if your city is high level.

As you can see, most of the auxiliary skills combine benefits of two base skills. With careful point distribution, you can further enhance a specific aspect of your army or cities.

As you learned in the tutorial, you can send one unit to scout out a camp or opposing city before deciding to send a full army over. ALWAYS do this, no matter how safe you think it is – you can never too safe!

You never know: the city you are targeting might be upgraded a lot, and while the army might be small, the city defense bonuses will surely aid them. You also do not know what the enemy players’ skills are, so that is another thing to consider.

You will receive a free chest periodically, and you can open it to reveal a random assortment of gear. Your hero has three slots for gear: a weapon, a shield, and armor. Gear will add skill points to your already existing skills, making it possible to really boost your performance in one area.

You can spend sapphires to get additional chests, but it is pretty pricey. If you are going to purchase chests with sapphires, we recommend getting at least the 3 chest pack, because it saves you sapphires in the long run.

Use the mass scouting ability!

For 2 sapphire, you can pick a city to do a perimeter scout. This will automatically scout out all nearby cities, saving a bunch of time. It only costs 2 sapphire to do, so if you break into the heart of enemy territory, it is worthwhile to do a mass scout.

Your starting city is considered your capital, and it is denoted with a gold crown. This should be your main base of operations, and you should try to level it up as much as you can. If you can get a city to level 30, you unlock the “Regroup” ability, which summons all of your soldiers back to that city.

Regrouping is helpful when you are facing a sudden attack from another player, and you need to bolster your defenses elsewhere. Having multiple cities at level 30 is quite the boon, as you can get your main forces around very quickly, but do not worry about doing that until you have established a main base first.

Every day you are given two daily quests that reward you with 25 sapphire each. These are relative easy to do, so try to do them as soon as you can before the daily quests reset.

In addition to those, there are achievements that reward you with sapphire as well. The ticker at the top of the screen will show you the next suggested achievement to work towards.

And that would be our guide on fighting efficiently in Million Lords. With a careful use of skills and positioning, you can amass a worthy army. If you have any other tips or tricks to share, let us know in the comments below!