It’s time to find out who’s the mightiest in Mighty Battles! Mighty Battles is a Clash Royale-styled game with an emphasis on quick rounds. As a commander, your job is to destroy the enemy base! Shoot down their units while deploying your own down one of the two lanes. Outsmart and outwit your opponent to bring forth a mighty victory! Our Mighty Battles cheats and tips will help you lead your troops through the battlefield!

Mighty Battles, while similar to the real-time strategy competitive games, has a few twists of its own in store for you. We’ve got you covered with our Mighty Battles cheats, tips and tricks strategy guide!

Units come in three different rarities: common, rare, and elite. Generally, the rarer a card is the more powerful it is. That being said, even if you do end up with a ton of elite cards, you don’t want to stuff them in your squad all at once.

You’ll need to read up on each unit to see what they excel at, but most importantly you need to take into consideration coin cost. With great power comes great costs, those costs being coins. The elite cards and some rare cards can take up to a full 12 coin gauge to summon, so you need to balance your squad!

If you have nothing but full coin elite units in your deck, you’re going to find yourself in trouble if the enemy finds a way to circumvent your unit. You won’t have any form of retaliation, so it’s a huge risk to play with a ton of high cost units. Instead, try to make a good balance between low and high cost units.

Now that you have a properly balanced deck, it’s time to get to know your units! Each unit has special characteristics to them, and it’s up to you to figure out which ones synergize with each other. For example, some units only target specific things like bases or structures, some have a lot of health but move very slow, and some dish out a ton of damage but can’t take much in return, among others. It’s up to you to build strategies around your squad!

Let’s look at the Tank unit for example. This rare-class card is packing a lot of health and even more firepower, but it only targets vehicles and the enemy base – everything else will be ignored. If left alone, the Tank can get easily overwhelmed by infantry units, especially the anti-armor ones. So, why not deploy it with a small squadron of cheap infantry units just so they can take out the targets the tank won’t go for?

Don’t forget about the Support cards!

Supports cards are special cards that can alter the battlefield or grant you new powers. The most common form of support cards you’ll find are ones that temporarily change your cannon. The Rocket Launcher card for example equips you with a, well, rocket launcher! This allows you to target actual units and blast to them smithereens! Support cards vary wildly in terms of coin cost, so keep an eye on that.

By default, your base’s turret will automatically shoot at enemy grunts coming towards you. Each grunt is worth two coins, and you should use all the coins you get for that wave. If you’re still holding onto some coins when the next grunt wave appear, be warned that coins will be wasted if you earn anymore when you’re already carrying twelve.

It’s okay if you want to save coins, but try to make it a habit of using as many as you can before a new wave of grunts show up. Of course, if you want, you can actually turn off automatic targeting in the settings if you want to target grunts yourself.

That’s all for Mighty Battles! If you’ve got any other tips or tricks to share, let us know in the comments below! 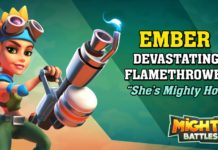