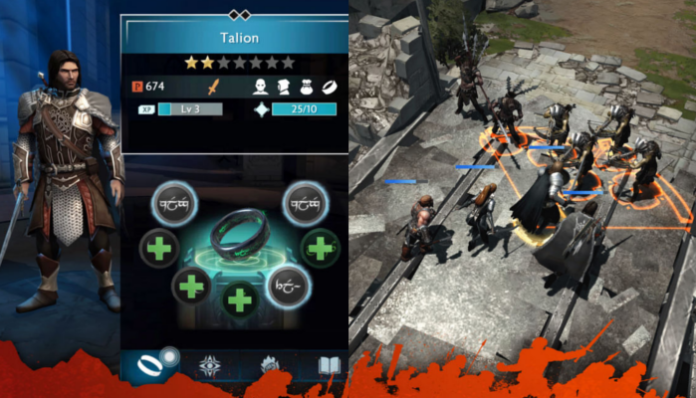 Active positioning is key on the battlefield!

You’ll learn in the tutorial that you can give your champions individual commands around the battlefield. These commands are useful for dodging powerful area attacks, positioning your units correctly, and focus firing. All of these techniques are key to mastering the combat in Shadow of War, so get the hang of them and use them often.

In addition to the techniques you learn in the tutorial, there’s one more thing you should keep in mind. Your party will automatically advance towards the enemies, and this might put your more fragile units in harm’s way. When you’re about to engage the next group of enemies it’s best to drag your tank-class unit ahead of the group so that they get the attention of all the enemies. Be sure to focus fire to bring down enemies fast!

You’ll need Ability Points and a little bit of mirian (the silver coins) to upgrade your champions’ abilities. You should spend ability points as soon as you can, because they take time to regenerate. Consider how little mirian you need to do so, there should never be a moment where you’re sitting on free ability points.

Seek out the ring inscriptions!

Shadow of War is unlike other tactical action RPGs in the sense that its difficulty ramps up pretty quick. By the time you get to the third orc nemesis, it might be a struggle to get through the regular enemies. If you’ve just been upgrading champion rings as you go, you might actually have to stop and go back to specific levels to get more inscriptions. When you’re at the ring upgrade screen, you can tap on an inscription you’re missing to see exactly where it drops. We recommend taking the time to upgrade your champions’ rings as much as possible, as it’s the main way of powering them up.

When choosing between either branding or executing an orc, we highly recommend branding a bunch of them early on. Branding an orc makes them join your team, which you can then summon during levels. They are powerful allies to have and can be the difference between victory and defeat. The catch is that they run on cooldowns – once they’re summoned, you must wait about an hour or so before they’re able to be summoned again. By massing a lot of orcs, you can have one for every important moment of the journey.

When you choose to execute an orc, you’ll be rewarded with a rune. The problem early on is that extra rune slots require your champions’ rings to be at a certain level, so you’ll just end up with a bunch of unusable runes if you execute too much. This is also another reason why you should upgrade your rings as soon as possible!

Champions come in four different classes: fighters, tanks, rangers, and supports. Fighters are close range melee attackers who excel in hitting fast and hard. Tanks are frontline warriors that have the highest health and defense, making them perfect for drawing all the attention from enemies. Rangers are ranged backline attackers that focus on consistent, sustained damage. Supports are utility champions that can aid and heal their teammates or weaken enemies.

For the best balanced approach, we recommend taking one of each class with you on your adventures. If you’re having trouble with a specific level, you can try experimenting with other compositions. Otherwise, we recommend just sticking with a balanced team.

That’s all for Middle-earth: Shadow of War! If you’ve got any other tips or tricks to share, let us know in the comments below! 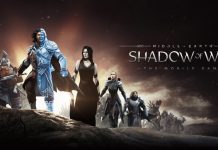 Pre-Register for Middle-earth: Shadow of War to Resume the Battle Against Orcs in Mordor