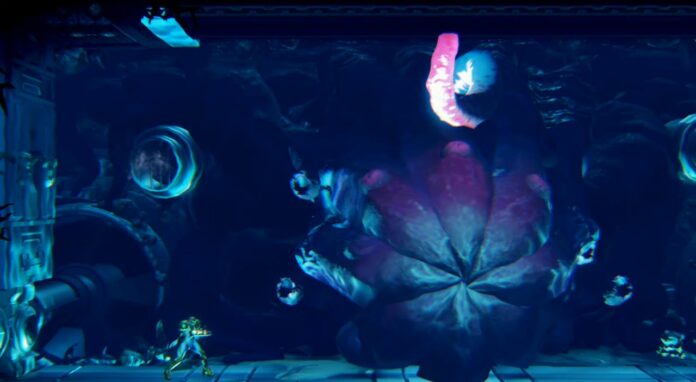 The Metroid series has always featured some very diverse boss fights, including some underwater fights, but the Drogyga boss fight in Metroid Dread manages to set itself apart from all the others thanks to its complexity and to the fact that it is a proper underwater boss fight, as Samus doesn’t have any gravity upgrade to make it easier.

Here’s everything you need to know to take down this boss with ease.

How to Defeat Drogyga the Water Boss in Metroid Dread

Drogyga is fought in Burenia pretty late in the campaign. As already mentioned, this is an underwater boss fight, so you will have limited mobility.

The main goal in this boss battle is to drain the water to expose Drogyga’s core to damage it. To do so, you will have to activate the turbines by shooting with a charged beam the buttons found on the left and right sides of the room, which requires you to restore power. Shoot Drogyga’s top tentacle to make it stop sucking energy and bring the turbines back online.

Once the water level has dropped slightly, start charging your beam and shoot at the nearest button, then use the Spider Magnet upgrade on the magnetic strip on the ceiling to move to the other side. Charge your beam again and shoot at the button to activate the turbine and drain the water to expose the boss’ core. Attack it with everything you have got.

After a short while, Drogyga will recover, and you will have to activate the turbines once again. Repeat the procedure described above while shooting down the projectile attacks and dodging the tentacle attacks by jumping or countering them and Drogyga will soon become history.