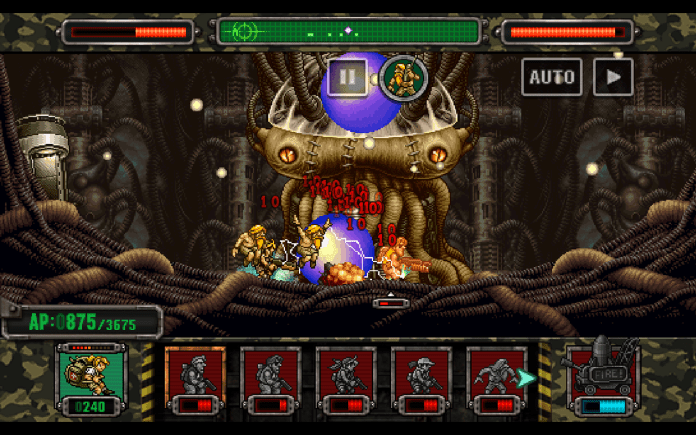 The sequel to Metal Slug Defense finally hits iOS and Android! Metal Slug Attack brings the tower defense strategy game into 2016 with new modes, units, and abilities! For all the Metal Slug fans out there, this game is one big love letter to the entire series. You’ll be able to recruit the classic heroes like Marco, Tarma, Eri, and Fio alongside memorable bosses from every single Metal Slug game. We’re here with a couple tips with our Metal Slug Attack cheats, tips and tricks strategy guide to defeating all of your enemies!

It’s time to attack, so let’s start with our guide on Metal Slug Attack to help you win your battles!

1. Watch the enemies at the beginning!

Look directly at the radar when you enter a level for the first time. You’ll want to deploy a cheap unit if you see enemies already moving towards your location. If you don’t see anything, then you can buy a couple of AP upgrades to give yourself a head start. The levels can become an uphill battle very quickly if you’re caught off guard at the beginning, so be careful!

2. Unleash a big attack as soon as possible!

The levels in Metal Slug Attack are designed to be beaten as fast as possible. This is emphasized with the game’s scoring system as the faster you are, the better your score. In most cases, you should restart a level and try a different plan of attack if you feel like the battle is dragging on. The trick to getting fast clear times is to overwhelm your opponent as soon as you can. Battles can “snowball” very quickly in this game, which basically means that momentum is a very real and dangerous thing. If you can continuously bombard your opponent, they will have a very rough time defending and trying to launch a counterattack at the same time. Keeping the pace up will eventually mean victory for you.

You start the game with a blue Soldier unit. His special attack lets him throw grenades in an upward arc. This is the perfect ability for finding hidden prisoners of war. POWs contain upgrade materials for your units, so it’s always best to find as many as you can. There are at least three hidden in each level. Throw grenades randomly when you’re sending a soldier out, and eventually you should be able to hit a hidden POW. The recharge rate for his special is pretty fast too, so don’t worry about wasting it. Try out different special attacks once you get more units to see if you find anything better.

4. Take advantage of the beginner event!

You’ll receive a lot of freebies in the mail because the game just launched and a beginner’s event is happening. You’ll also receive double experience for every level you beat. Above all of this, the best part is that you can continue if you lose a battle for absolutely free as many times as you want. Continuing normally costs medals, the premium currency of the game, so take advantage of this while you can! Once you hit player level 9, you lose access to all of these bonuses.

Each unit has unique skills that strengthen them in some way after you’ve “released” them with a full set of items. These skills seems to be mostly passive bonuses, but they’re still helpful. They provide stat boosts like more damage, more health, and so forth. Upgrading your unit stats straight through the status screen is great, but if you want to improve them even further, be sure to upgrade their skills too.

That’s all for Metal Slug Attack! If you have any other tips or tricks to share, let us know in the comments below!