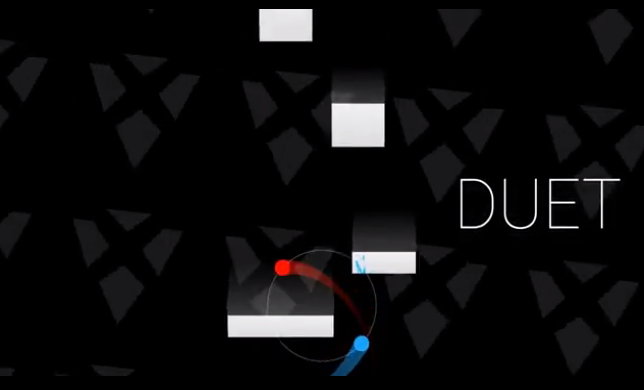 If you’re a fan of iOS-based puzzle games like Time Surfer and Bean Quest, you’ll be excited to hear that the developer behind both of those games, Australian-based Kumobius, is currently working on a new reflex-based puzzle arcade game which they’ve dubbed as Duet.

According to Kumobius’s official description of Duet, the game is: “a mesmerizing mobile arcade game about radial awareness and acute dexterity” and it involves guiding a pair of dots, one red and one blue, in-between various patterns of falling blocks. The catch is that the two dots can only move in either a clockwise or counter-clockwise motion in tandem with each other. The player can speed up, slow down, and reverse the two dots’ direction and must anticipate how best to weave through the falling blocks in real-time.

As can be seen in the below trailer, Duet looks like it will be perfect for gamers who enjoy a challenge as even the opening moments look like they’ll require dozens of retries in order to be fully mastered, one can only imagine what some of the later levels will entail (funny how the trailers always make these sorts of games look so easy….).

Kumobius doesn’t currently have a price point in mind for Duet nor could they confirm any sort of release date other than “by the end of the year.” In the meantime, if the prospect of testing yourself with a challenging new iOS game gets you excited, be sure to keep an eye out for Duet in the coming months.