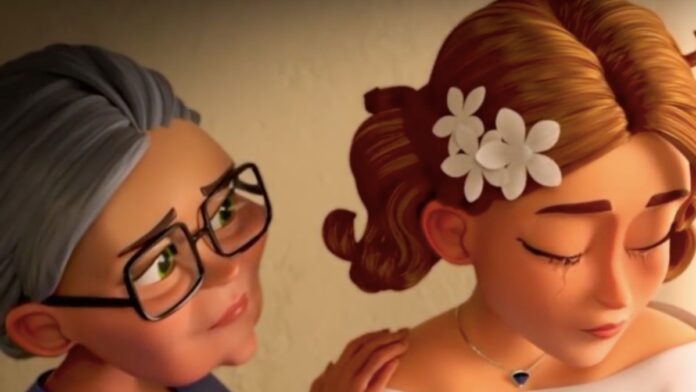 Merge Mansion may look like your typical bait mobile title to some. That is the farthest thing from the truth about this game, whose cryptic advertisements have captured the attention of players everywhere. After a tweet about the game went viral, the number of people downloading it increased and it has now become a viral sensation. Merge Mansion’s fascinating story and lore keep players hooked, and it likely will for you as well.

The Background Of Merge Mansion Characters

We begin with a young woman named Maddie who is watching her home burn down while wearing a wedding dress. Between that and seemingly being stood up by her fiance, she’s not exactly having a good day. She’s comforted by her Grandmother, who brings her to a mansion that is the textbook definition of a fixer-upper. This home is an old family mansion with many secrets inside it, including possibly a hidden fortune.

In the process of fixing it up, Maddie is harassed by a city inspector who deems the house too dangerous and plans to have it demolished. Maddie gets around this by sleeping with him in a strange turn of events. As the story goes on, her Grandmother typically shows up at the end of a quest and reveals the story of the mansion in small tidbits, but never in a full context. As things go on, we can see that the grandma is just using Maddie as a pawn for free labor and isn’t as warm as we thought.

What Happens To Grandma In Merge Mansion

In fact, it may very well be that it was her who set Maddie’s home ablaze. This theory is particularly believable when Grandma is suddenly arrested but the player isn’t told why at that moment. The only clues (that are shown in different versions) are writing on Grandma’s hand that either says “You’re Next”, “I Planned This”, or “He Is Alive”. Each one of these connects to theories about the full story.

Arson may not be Granny’s only crime here. Later on in the game, we get shots of newspaper articles saying things like “Killer Grandma Caught”. At one point, the Granny is about to mention something to Maddie regarding her fiancee, making it possible that was her who in fact, may have murdered him or chased him off, the latter being why she writes “He Is Alive”. Whether it was over something he did or for her own ambition, it’s clear they are connected somehow.

As we know by now how manipulative grandma is, things begin to look awfully suspicious when Maddie keeps bringing her pies, especially after one of the ads showed Grandma putting a file in the pie. The theory is that by doing so, she would leave her granddaughter looking like an accomplice in her escape. If all went according to plan, Maddie would go to prison for being an accomplice and grandma would be running off with the fortune from the family mansion. This is why Grandma leaves the note on her hand of “You’re Next”.

The New Version Of Merge Mansion

This was the first theory of the story. However, once the lore of Merge Mansion became viral on Twitter, the creators saw an opportunity to expand their horizons and released a series of ads telling the story of the game using real live actors, with grandma being played by the famous actress Kathy Bates. In it, Maddie is shocked to find a room on the property filled with tons of different knives. One would assume grandma would be furious about this, but she seems quite nonchalant about it. In fact, she doesn’t try to hide her bizarre behavior at all.

At one point, a blood-covered Granny walks by Maddie offering a pie to a group of people. There’s too much of a coincidence to not further deduce that Grandma is in fact, a serial killer who puts the body parts of her victims into her pies Mrs. Lovett style. The reason Grandma doesn’t hide the “family business” is because she fully intends to groom Maddie to take over for her when she is eventually arrested, hence why the note on her hand says “You’re Next”.

Merge Mansion’s twists and turns will surprise anyone who plays it. It’s proof that if even your project moves in a direction you didn’t expect, you should fully embrace it and that is exactly what the creators did. Overall, Merge Mansion’s story makes it worth downloading.