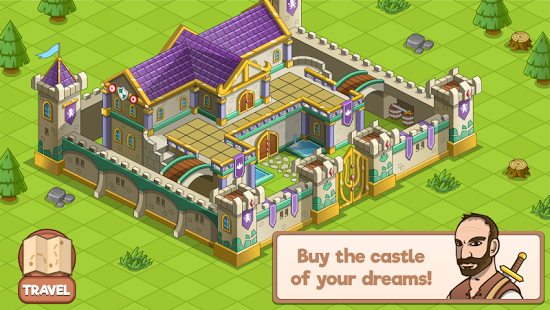 Medieval Life for Android is a brilliant game! Starting from a puny little house, you are challenged to build up a castle and decorate it as you feel looks best. But in order to do so, you need to collect money – and to do that, you must defeat various monsters and complete quests.

It’s extremely fun and nice, and the prospect of building a larger house and getting better items keeps you playing for hours. And I am here to try make that experience a lot more interesting by sharing a bunch of Medieval Life cheats and tips – a complete strategy guide that will teach you everything there is to know about the game.

So let’s not waste a single second and let’s check out below some tips and tricks for Medieval Life – the awesome Android game.

Focus on weapon upgrades early on
I know that the main goal is to build a larger house and buy as many items to decorate it as possible, but hold on for a second. You can’t get far if you can’t defeat the monsters and you can’t beat the monsters if you don’t have a solid weapon.

This is why you should focus on spending your hard earned cash on upgrading your weapon first. After upgrading it 2-3 times, you will already be able to easily destroy most monsters in 1-2 hits, so everything will play out a lot faster. You will get more kills this way and quickly fill the inventory with monsters you can sell for coins.

Just ignore monsters you can’t beat
The same goes for monsters that require a lot of time to be defeated. There’s absolutely no penalty for quitting a fight, and it’s better to do so that spend 10 minutes trying to defeat a monster. At least that’s what I do in order to maximize the profits.

The only moments when you should spend some more time trying to defeat a monster is when you face a legendary one – but event hen you should try to be realistic and only continue the battle if you stand a real chance.

When it comes to beating the Legendary monsters, it’s a good idea to go to battle only when you have a few special items ready in order to increase your chances of winning – and use them at the right time. Otherwise, your chances of defeating them are pretty slim.

Focus on completing quests
Quests reward you greatly – more rewards than what you’d get if you were selling the required monsters individually. Therefore, it’s a good idea to focus on completing the quests first. They will also help you progress faster through the game.

Fish can be fought too
Not sure if you found that out already, but if you are fast enough to tap a fish when they jump out of the water, you can also fight them and collect them for selling as you do with regular monsters. Some are really tough, too, so it’s worth fighting against them.

Invest in traps ASAP
Traps are an extremely solid method to earn a lot of money passively. They require a large investment, but they end up returning profits really soon – just be active and collect from the traps as often as possible.

Spin the wheel at the Frostland
As soon as you unlock Frostland, make sure you travel there and use the “watch ad” option to spin the wheel. This way, you can easily gain some extra coins for free. And while you’re there, don’t forget to defeat a bunch of monsters and complete some quests as well!

How to beat all monsters
First of all, the damage dealt by your weapon is extremely important. You can be very good at tapping the Attack button at the perfect time: if your weapon can’t deal enough damage, there’s not much you can do.

But if you have a decent weapon, keep an eye on the bars. My strategy is to focus on the enemy’s bar and tap the Attack button when it’s at the lowest. Keep your bar in your peripheral vision though and always attack when yours is at maximum levels.

Don’t be afraid to wait a little as well: even though the meter drops with time, a well placed hit will definitely overtake it and put you on the leading trail. And also use potions for the most difficult monsters. I would only keep those for the legendary ones, though: always consider the money you spend on a potion and the money you get in return when deciding if it’s worth using potions!

These are our tips and tricks for the game. If you have extra suggestions for fellow players, don’t hesitate to share them with us in the comment section below!