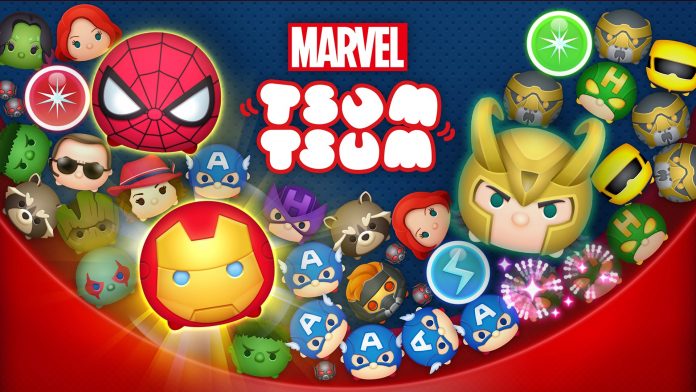 The Marvel universe joins Disney in the cute and cuddly world of Tsum Tsum! Marvel Tsum Tsum is match-3 puzzle game in the same vein as Disney Tsum Tsum, but of course featuring Marvel heroes instead. If you’ve played Disney Tsum Tsum, this game plays nearly identical to that one, so the tips and tricks you’ve learned there also apply here. If you’re a new player, fear not! We’re here with our Marvel Tsum Tsum cheats, tips and tricks strategy guide!

Match-3 games always involve a balance between skill and luck, and the tsum games are no exception. Regardless here’s some Marvel Tsum Tsum tips and tricks.

1. Don’t worry about the stars early on!

As we played through the first couple of stages, we quickly realized that the score requirements to getting all three stars were actually kind of high. It’s a bit abnormal to have score requirements that high early on, but it’s not a big problem. While it’s definitely not impossible to get the stars on your first run through, it can prove quite challenging. Don’t worry if it’s too tough to reach on your first play through – it’s more important to keep moving on.

You have a passive score bonus that’s tied to your level; the higher level you are, the more bonus points you’ll earn at the end of a level. You can revisit the levels once you’ve leveled up a bit, making it slightly easier to hit those tough score requirements. Your tsums also add to your score, and they also give more points the more they are leveled.

2. Save your bombs and skills for mega charge!

The key to scoring high in this game is to use all of your special abilities during a mega charge. Mega charge builds up as you match tsums, and once built you will enter mega charge mode for a couple of seconds. During this time, everything you do is worth triple the amount of points, so it’s best time to detonate bombs and use your skills. Don’t detonate bombs you make right away!

You can use your currently selected tsum’s skill once you’ve matched it enough. They all vary from tsum to tsum, but they usually clear out a small portion of the board. However, if you charge up your skill and don’t use it, you’ll get another part of Last Bonus. The game will randomly select a tsum from the board then automatically match every single one of that tsum. Depending on your luck and the board composition, this might score you a ton of points, more so than if you had used your skill normally. If your skill isn’t too helpful, considering saving it for that last bonus.

4. Use your skill often during battle levels!

On the other hand however, no matter how your tsum’s skill functions, they are incredible helpful during battle levels. Hitting the tsum you’re fighting with a skill will result in a big chunk of damage, so it’s important to build up your skill as fast as you can. Most of the battle levels’ stars require you to beat the enemy tsum within a certain amount of time, and your tsum skills will definitely provide a lot of help.

5. Save your orbs for boxes!

To get all of the tsum tsums, you will need to buy the Orb Boxes which cost 5 orbs each. Coin boxes contain some but not all of the tsums you can find in the orb boxes. As of now, orbs are pretty hard to come by so it’s best not to spend them on anything else. When you’re close to achieving a star on a level but you run out of time, the game give you 10 more seconds in exchange for an orb. While this sounds tempting it’s usually not worth it so save your orbs!

That’s all for Marvel Tsum Tsum. If you have any other tips or tricks to share, leave a comment below!