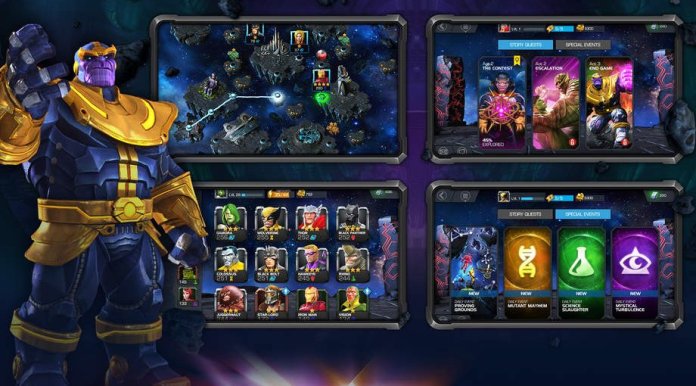 Wow, finally! A really cool beat’em up action game with Marvel superheroes available on the App Store, free of charge. And a game of really high quality – almost too good to be true. But here it is, Marvel Contest of Champions, the game that you’re probably loving to play so far. However, beating all the enemy superheroes is not the easiest job on earth so we’re here to help a bit with some Marvel Contest of Champions cheats and tips for you, an article that will hopefully become a real strategy guide for all players out there.

So let’s not waste any time, and let’s see how to get the most out of Marvel Contest of Champions with our tips & cheats article!

1. Upgrade your starting champions from the start
Usually, in games like this one, your starting 1 star champions get outdated pretty quickly, so there’s no point upgrading them. In Marvel Contest of Champions, you don’t get a ton of champions fast unless you are ready to spend some real money, which you are not. In this case, start upgrading your champions as soon as possible and level up to the maximum level. Start with your strongest character, though, just to make sure!

2. Class bonuses matter
In some occasions, your characters will get a class bonus (or class penalty) based on the class they are facing. Never go in a battle with a penalty, and always swipe through your heroes to see if you get a class bonus. Even more, when you learn how class bonuses work, you can choose the easiest path to complete a quest based on these classes.

3. Start all battles with a block
This is a “Better be safe” strategy, because I found out that most enemies start the round with an attack, and even if you start the same way, they will hit you first. So it’s better to start with either a block or a swipe backwards, and get ready to counterattack.

4. Keep it simple
As much as you would like to vary your attacks and go for the show, it’s better if you keep it simple and safe: go for the basic attacks (I prefer the swipes, for example) and build your own strategy to keep the combos going. In my case, it’s something like this: three successful quick attacks, then a swipe back or a block, sometimes two if the enemy starts to attack. Then I continue with the quick attacks and retreat as soon as the enemy starts blocking. When they are done with blocking, I get back to my regular attack. It’s true that strong attacks do more damage, but being safe keeps you alive and works just as well.

5. Enjoy the versus matches
Playing versus matches – and winning them – is an extremely nice way for you to get some extra crystals in the game and getting extremely angry, too. But you should send all your champions into battle because the more you play, the higher your chances for versus crystal wins, and there’s a lot for you to gain, including 4 star heroes!

6. Claim your free crystals
You get some freebies from the game, including a crystal every four hours, and one daily that rewards you with some nice heroes. Make sure you log in when needed to claim these crystals as they will help you tremendously.

7. Go 100% on all quests
The quests that you play have multiple paths, and you should make sure that you complete them all before moving to the next one. This one, not only that you get the 100% completion bonus, but you also earn XP and goodies for your heroes to keep you getting better.

8. Learn the moves of your heroes
Some have the special attacks that only work when you are close to an opponent, others are ranged. Some have their sliding attacks better, others the quick attacks better. In all cases, learn how your characters work and make sure you put that to your advantage!

9. Replay quests
There will come a time when you will have to start grinding on quests in order to be able to upgrade your heroes even more. Make sure that you do so early on to avoid the frustration later on: the sooner you max out your heroes, the better!

10. Sometimes, your heroes die
In the quest missions, it’s not the end of the world if your characters die. You can still use the ones left to keep on going and, even better, the damage that you have already inflicted remains there. So maybe sometimes you will even have to sacrifice some of your own just to make it easier for the other superhero.

These would be for now our Marvel Contest of Champions tips and tricks for a perfect strategy. If you have extra suggestions for us, don’t hesitate to let us know!