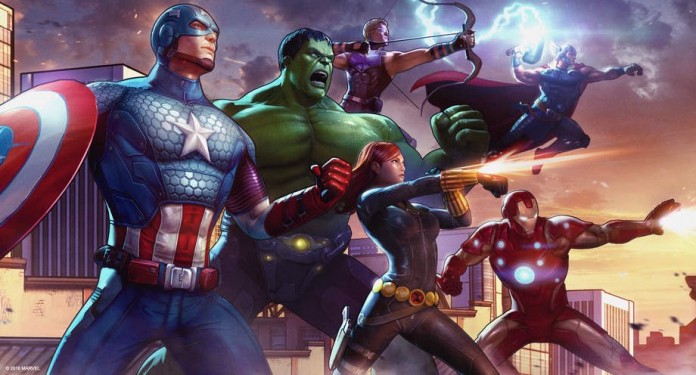 Marvel: Avengers Alliance 2 has finally been released worldwide and the new superheroes are waiting for you (as well as Coulson, who has a ton of missions for you!) If you’re just starting to play the game, we are here to share with you a bunch of Marvel: Avengers Alliance 2 cheats and tips that will help you understand the basics of the game and give you some hopefully helpful advice when it comes to winning all battles and unlocking all heroes for your team.

There’s a lot to master in the game, but we all have to start somewhere, so let’s not waste any time and let’s check out TTP’s Marvel: Avengers Alliance 2 tips and cheats below (aimed mostly at beginner players, but more advanced players should read them as well as maybe they find something new).

1. How to spend your gold
I think that this is a pretty obvious one, but I have to say it: the only thing you should be spending your gold on, at least early on in the game or until you’re satisfied with the heroes that you have, is on getting Superior Power Cells. This is the only way to add new heroes to your roster (other than the free hero you get after 7 days), so even though you’re at risk of not getting a hero from these Cells, spend all your gold on them at first. Once you are completely satisfied with the heroes you have, spend the Gold on Scouting mission refreshes.

2. Pick your free hero wisely
After seven days of playing, you are offered the chance of choosing a free hero for your team. All of them are good, but my suggestion is to pick one that would really boost your setup, and not your favorite one. So either pick one of an element you don’t have or if you have all elements already, pick the one that’s better than your worst hero.

3. Learn the class advantages
There are a ton of classes in Marvel: Avengers Alliance 2 and things might seem a bit overwhelming at first, but it won’t take long before you will learn which classes have advantages over others (and if you don’t, you can always check them out before going to battle by tapping and holding the class info on the right). Try to always bring heroes that have an advantage over your opponents, or at least don’t bring to battle heroes that have a class disadvantage over your enemies. Why make things more difficult?

5. Make friends!
Friends are extremely important in Marvel: Avengers Alliance 2 because not only you get access to great heroes that will help you a lot in battle, but you also get more silver, both from the heroes you hire from your friends, but also if your own heroes are brought into battle. So it’s extremely important to have as many friends as possible in the game!

6. Use the ISO compounds smartly
You can get extra experience for your heroes by using the ISO compounds you find during battles or by other means, but use them smartly: always use them based on element in order to get the biggest XP gain, otherwise you’re just wasting precious experience points. Also, I would recommend not to rush and invest all your XP boosts early on in your characters because you might get better ones and never use the weaker at all anyway!

7. Carefully choose the active skills
As you play, you will unlock more and more skills for your characters, but they won’t be able to bring them all to battle. Check out what they do and always choose the best, considering both their upgraded effects and how they help your team. A skill might be good on its own, but another might be better overall if it offers a huge boost to your teammates or massive bonuses overall. Always look at the big picture when choosing the active skills of your Heroes.

9. How to attack the enemy members
Excepting the moments when you want to focus on an overpowered enemy that ca do a lot of damage, I would suggest attacking first the enemy that you can destroy the fastest, ideally before it attacks or at least before it manages to attack twice. Focus on one enemy at a time and completely destroy them before moving to a new one (you can still use AoE attacks, of course!). Usually, when it comes to boss battles, it’s best to destroy the other troops they have with them and only focus on the boss at the end because they usually have a ton of health and if you focus on them from the beginning, you’re probably going to fail as you will get extra damage from their “minions” as well.

These would be, for now, our Marvel: Avengers Alliance 2 tips and tricks aimed at beginner players. If you have more to add, do so in the comment section below and don’t forget to check back often with our website as we’ll bring you more MAA2 related content soon!